Final EnAlgae report card published ahead of project close out

The final report card for the Swansea University led EnAlgae project has been published and is now available online. 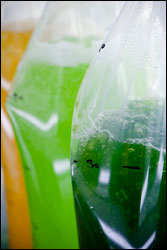 Focusing on products and impact, the report summarises the work undertaken during the five-year lifetime of the project and highlights the legacies that will be left behind thanks to EnAlgae.

“One of the major ideas enthusiastically considered five years ago was the potential role of algae in energy generation,” said the project’s principle investigator, Professor Kevin Flynn of Swansea University’s College of Science, in the card’s introduction.

“With the barrel cost of oil almost halving, and revised estimates for the realistic potential for algal biofuels coming from the EnAlgae project, it now looks highly unlikely that algae can contribute significantly to Europe’s need for sustainable energy.

“This could be taken in a negative light, but I have always considered “energetic” algae to refer not so much to energy but to their great potential for commercial exploitation.  And many technologies required for algal biofuels are required for the reliable mass production of algae for other sectors, such as food, nutraceuticals, and so on.

“The need for food, alone, is just as important to Europe as is energy, and algae contain valuable dietary components for humans.”

The report also outlines the best practice developed for both micro and macro algal cultivation, the political environment and regulatory framework in which the fledgling algae industry exists in North West Europe, and  the decision support toolset and Algal Information Network that have been set up to try and help move this industry forward.

“I hope people will find it useful and use it as a reference guide moving forward.”

There is still time to register for the EnAlgae close out conference, which is a free event and takes place on Tuesday, September 29, at Espace Banca Monte dei Paschi, Av. d'Auderghem 22-28, 1040 Brussels. Please email anna.salimbeni@etaflorence.it for further information.

The day starts with registration at 9.30am and continues until the end of a networking session at 18:00. You can also follow the event via Twitter and #EnAlgaeclose or @EnAlgae_NWE.

The EnAlgae project is led by Swansea University and funded by the European Union under the INTERREG IVB North West Europe programme. EnAlgae unites experts and observers from seven EU member states to determine the potential benefits of algae as a future sustainable energy source.

Anyone wishing to learn more about the EnAlgae project can visit www.enalgae.eu.