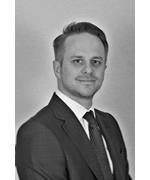 During his management career, he was involved in several major projects and initiatives, which led to him being asked to deliver guest lectures to university students. This sparked an interest in teaching.

Scott returned to university as a mature student to complete a PGCE and was later awarded Qualified Teacher Status, having completed placements teaching law and business. Following the PGCE, he completed an MA in Professional Development, Education & Training.

In 2014 he was appointed as a lecturer in the School of Management. Scott has taught across almost all departmental subject areas, including: marketing; strategy; enterprise & innovation; and people & organisations.

Outside of the university Scott works as a consultant solicitor with a primary focus on commercial law and litigation. Scott is also a trustee and vice chair of a national advocacy charity.

Scott previously served as peer reviewer for the Journal of International & Interdisciplinary Business Research and the textbook Effective Management.

Scott is a qualified solicitor and a Fellow of the Higher Education Academy and the Chartered Management Institute. He is a member of The Law Society of England & Wales; The Association of Law Teachers; The Society of Legal Scholars, The Industrial Law Society, The Employment Lawyers Association, The Employment Law Bar Association and an Affiliate Member of the International Society for Labour Law and Social Security.

In his spare time, Scott likes to do voluntary work. He is Vice-Chair of Advocacy Support Cymru and a school governor.