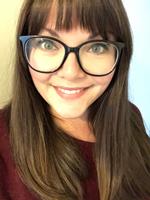 Sophie qualified as a pharmacist in 2013 from Cardiff University and obtained a clinical diploma position within Swansea Bay University Health Board where she rotated around various specialities including medicine, surgery, oncology, neonatology and aseptic pharmacy.

Sophie has continued her career in hospital pharmacy, focusing on general medicine and pharmacy education and training.

She is also an independent prescribing pharmacist, specialising in the treatment of venous thromboembolism and is part of the VTE pharmacy team that has won several awards for their contribution to patient care within this specific area.