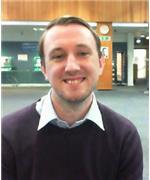 Stephen Harrison is a historian of ancient Greece and the ancient Near East. His research focuses on the sixth to second centuries BCE, the era of the Achaemenid (Persian) Empire, Alexander the Great, and the Hellenistic kingdoms. He examines the interplay between these empires thus challenging traditional periodisation and crossing disciplinary boundaries. Stephen is particularly interested in the interaction between Greece and the Near East in this period and he uses kingship to explore this relationship. More generally, he is interested in the representation of power and in interdisciplinary approaches to monarchy and empire.

He is currently writing a monograph based on his doctoral thesis. Entitled Achaemenid Kingship, Alexander the Great, and the Early Seleucids, the book is under contract with Edinburgh University Press.

Stephen is passionate about communicating with as wide an audience as possible and has been involved in several public engagement activities. Most notably, in 2018-2019, he co-led an exciting film project with Jo Berry. Entitled ‘The Ancient World on Film’ and funded by a £15,000 grant from HEFCW, the project saw more than twenty students work with professional filmmakers and members of the local community to transform some of our most important academic ideas into interesting and accessible films. The films can be viewed here, including one about Stephen’s own research (“Sisygambis”).