Researchers from the School's Biochar Research Team, in collaboration with a strong international team from US Department of Energy, Cornell University and University of New South Wales, have published a seminal paper in the journal Nature Communications demonstrating the important contribution that sustainable biochar production could offer to the mitigation of global climate change

Biochar is a carbonised material, similar to charcoal, produced from waste biomass[1], which when added to soils can improve fertility and reduce leaching from agricultural land, while storing away carbon that would otherwise contribute to atmospheric greenhouse gas concentrations.

The paper, entitled ‘Sustainable Biochar to Mitigate Climate Change', by Dominic Woolf, pictured below, (Swansea University), Jim Amonette (US Department of Energy), Professor Alayne Street-Perrott (Swansea University), Professor Johannes Lehmann (Cornell University) and Stephen Joseph (University of New South Wales) comprises a detailed assessment of the impact that biochar production could have on greenhouse gas emissions over the next century if practiced in a sustainable way.
It is based on the most up-to-date global land-use surveys to assess sustainable biomass resources, coupled with modelling of the rate of technology uptake, energy losses through transport, tillage and processing and the impact of biochar production and its addition to soil on several important greenhouse gases.  Conservative assumptions have been used throughout in order that the assessment can provide a low-risk basis for decision making. 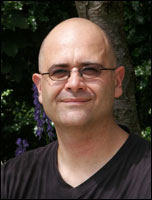 Lead author, Dominic Woolf, PhD student and Associate Lecturer in Sustainable Development at Swansea University, explained: "Every year, photosynthesis by terrestrial plants removes nearly 10 times as much of the greenhouse-gas carbon dioxide from the atmosphere as is produced by human activity.  Photosynthesis is the only known process that can remove CO2 from the atmosphere at this enormous rate.  Normally, most of the carbon that plants have removed from the atmosphere is recycled rapidly back to the air as their biomass decomposes. Biochar is a way to lock up some of this biomass carbon in a stable solid form by the simple process of heating it in the absence of oxygen (pyrolysis) to convert it into charcoal.  The exciting thing about biochar is that if this charcoal is added to agricultural soil, it not only locks up carbon for centuries to millennia, but can also improve fertility, moisture availability and crop growth, particularly on less fertile soils.  Furthermore, the energy released during pyrolysis can be used for anything from providing heat for houses to electricity production.

“In essence, we are getting plants to work for us by removing carbon dioxide from the atmosphere that would otherwise contribute to the greenhouse effect.”
However, it is possible to produce biochar in either a sustainable or a non-sustainable way.  There are numerous limitations to how much of the world’s biomass could be converted to biochar sustainably.  Clearing forest to provide feedstock or land on which to grow it would not only be disastrous in terms of its implications for biodiversity and ecological services, but also makes no sense as a means to abate climate change, since it would take decades to centuries for the carbon released by the act of land clearance to be recouped by storing away carbon in biochar.  Converting agricultural land to biomass crops can have the same effect by displacing agriculture into newly-cleared land.  Removing too great a quantity of agricultural and forestry residues from the land can cause soil erosion and degradation.  Many types of waste biomass may also be unsuitable as feedstock if they are contaminated with elements unsuitable for adding to soils (e.g.  treated wood or paper).  Furthermore, it is important that the production of biochar be done using clean modern techniques that do not emit pollutants such as soot or other greenhouse gases such as methane as happens in traditional methods of charcoal manufacture.

Sustainable sources of biomass, on the other hand, would include limited amounts of forestry and agricultural residues such as straw, sugar-cane trash, orchard prunings and hedge trimmings; food-processing wastes such as rice husks, corn cobs and sugar-cane bagasse; and livestock manures in regions where applying them directly to soil would cause excessive nitrate run-off.  There is also scope for growing dedicated plants for biomass provision on abandoned degraded soil that has not subsequently been converted to forest, pasture or other uses.  With careful choice of plants, this can be done in a manner that restores degraded soils and can (as in, for example, traditional coppicing) even increase biodiversity while providing useful biomass.  Integrating trees into agriculture in a range of sustainable land-management practices known as ‘agroforestry’ could also provide significant amounts of feedstock, particularly in the tropics.

What we have shown in this study is that even if we apply strict sustainability constraints on how the biomass feedstock is obtained, on what types of clean technology are used to convert it and on how much biochar can be added to soils, biochar could still counter 7-12% of current greenhouse-gas emissions without endangering habitat, food security or soil conservation.  On average, this is a 20-30% greater climate mitigation impact than would be achieved by burning the same biomass for bioenergy to offset fossil fuels.  Although, in those regions with already fertile soils where crop yields are unlikely to be increased by biochar additions, bioenergy could give up to 20% greater mitigation impact than biochar provided it is used to offset coal combustion.  Even in such regions, though, other benefits of adding biochar to soils may still make it preferable to bioenergy.  One such benefit that may be of particular importance is that phosphorus – a nutrient upon which all our food production depends and sources of which are rapidly depleting – is retained and returned to the soil in biochar, whereas it is lost during biomass combustion.

The climate-change mitigation potential of biochar that we have demonstrated is significant because, as Professor Alayne Street-Perrott notes: “It is becoming increasingly clear that to stabilise the climate there is a need to promote technologies that not only reduce emissions of greenhouse gases, but also reduce their concentration in the atmosphere.  One particularly attractive feature of using biochar to achieve this is that it can be carried out in both developed and developing countries, at all scales, from individual households to large modern plants that produce significant amounts of useful energy and heat."

To view a full copy of the paper ‘Sustainable Biochar to Mitigate Climate Change' visit http://www.nature.com/ncomms/journal/v1/n5/full/ncomms1053.html.

[1]‘Biomass’ means any living or recently dead organic matter.  This includes, for example, plant matter, animals and animal dung.  It does not include ancient organic matter that has been converted to oil, gas or coal which are referred to instead as ‘fossil fuels’.