How sloths can breathe easily upside down

Sloths, the world’s slowest mammals, which live in the rainforests of Latin America, spend up to 90% of their life upside down. Yet this doesn’t affect their breathing, as it would with humans. A Swansea-led research team have discovered that this is because sloths' internal organs are stuck down, preventing them weighing down on the lungs.

The research, published by the Royal Society, was carried out by a team from the College of Science, with colleagues from the Sloth Sanctuary in Costa Rica.  It will help scientists understand these elusive and charismatic creatures, which are endangered by loss of their rainforest habitat. 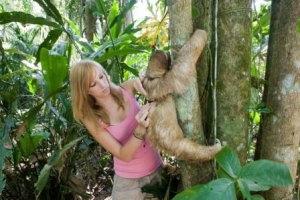 Picture:  Swansea University researcher Rebecca Cliffe fitting a backpack to a sloth, to allow it to be monitored.

Sloths live in rainforests in south and central America.  They spend most of their time hanging from their hind legs to reach young, tender leaves growing on the tips of branches.

They are one of the least studied mammals. Their survival strategy is camouflage, and as a result we know very little about how they live in the wild. Even the most basic information such as their natural diet and habitat preference still remain a mystery.

Renowned for its slow metabolism, the sloth can take a month to digest a single leaf, and it can store a third of its bodyweight in urine and faeces -- which it deposits about once a week.  This means that the stomach and bowel contents are extremely heavy.  The question the team investigated, therefore, was why this extra weight does not appear to affect their breathing when they are upside down.

The team found the answer: numerous unique adhesions in the abdomen anchor organs such as the liver, stomach and kidneys, preventing them from pressing on the diaphragm and inhibiting breathing. 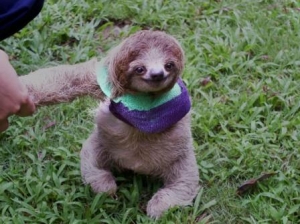 Picture:  a sloth at the Costa Rica Sloth Sanctuary, which collaborates with the Swansea University team.

Rebecca Cliffe, one of the authors of the paper, is a PhD researcher from the College of Science at Swansea University, and works at the Costa Rica Sloth Sanctuary.

She explained what the team found:

"Sloths have multiple internal adhesions that bear the weight of the stomach and bowels when the sloth hangs inverted. We estimate that these adhesions could reduce a sloth's energy expenditure by 7 - 13% when hanging upside down.

To a sloth, an energy saving of 7 to 13 percent is a big deal.  They generate just about enough energy from their diet to move when and where required, but there is not much left in the tank afterwards.

It would be energetically very expensive, if not completely impossible, for a sloth to lift this extra weight with each breath were it not for the adhesions.  The presence of these simple adhesions therefore really is vital.”

‌Prof Rory Wilson of the College of Science at Swansea University, who supervises Rebecca Cliffe’s research, and is a joint author of the paper, said: 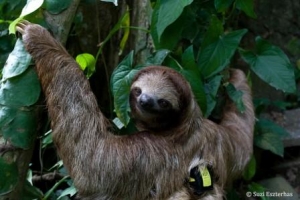 "Nothing that sloths do is normal.

They are quite the most extra-ordinary and "off-the-wall" mammals I have ever come across and yet we know so very little about them.

How foolish we would be to watch these creatures become victims of deforestation and habitat fragmentation and the like without having the slightest idea how to help."

•    The sloth is the world’s slowest mammal, so sedentary that green algae grows on its coat, which helps camouflage it

This research has been widely reported in the press: