Swansea University students form a marine conservation NGO after MRes degrees reveal the extent of the problems that our important seagrass meadows face. 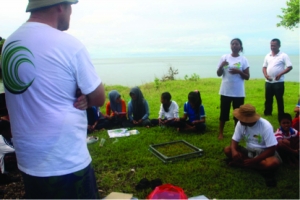 During the research conducted for their MRes degrees in Aquatic Ecology and Conservation at Swansea University, Benjamin Jones and Richard Lilley discovered just how little people in the UK knew about seagrass, and the important roles that seagrass habitats play in coastal ecosystems.

Globally, over a billion people live within 50km of a seagrass meadow, yet only a small fraction of these people even know that seagrass exists and evidence suggests that this trend holds true for the UK too.

Seagrasses are flowering plants and form productive and biologically rich habitats, but across the globe these species are under threat. In the UK, these habitats provide support for commercially and economically important fish species including juvenile Bass, Plaice, Pollock, Whiting and Cod. Further evidence of the major role was collected as part of Richard Lilley’s research that investigated the nursery role that seagrass plays in specifically supporting juvenile Atlantic Cod.  Seagrass meadows in the UK also provide important food for wildfowl, such as brent geese, and nutrients to support animal communities on the seabed. The research conducted by Benjamin Jones for his MRes thesis has shown that these habitats, specifically in the UK, are close to environmental thresholds and contains very little resilience to environmental change. 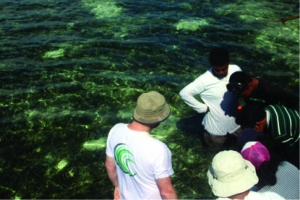 Every hour, an area of seagrass the size of two football pitches is lost around the World. This rate of loss is equal (if not greater) to that occurring in tropical rainforests and on coral reefs yet it receives a fraction of the attention. Benjamin Jones and Richard Lilley wanted to change this. With the help of their supervisor, Dr Richard Unsworth, the team joined forces to create Project Seagrass, an organisation dedicated to advancing the conservation of seagrass through education, influence, research and action.

Seagrasses face a host of problems locally and globally but because of their 'uncharismatic' nature, they are often forgotten or marginalised in conservation agendas. 'People don't necessarily understand its importance - it doesn't have the charismatic appeal. For example, in the tropical oceans it doesn't compare in colour to coral reef. But it actually has a huge impact on the productivity and biodiversity of the coral reef and marine ecosystem,' said Dr Richard Unsworth.

The work of the Project Seagrass team is slowly trying to change this attitude and through education and active conservation initiatives. Via the use of social media, the trio have gained an impressive following over the last few months. In addition, Benjamin Jones has worked with students from the University of South Wales while in Borneo, where he conducted a workshop covering the importance of seagrass for tropical ecosystems and included monitoring activities on a local seagrass meadow. The group have been active during 2014 and in April, Benjamin Jones and Richard Unsworth headed to the Wakatobi, Indonesia to assist with a project funded by the Waterloo Foundation to help understand the importance of seagrass for food security.

Richard Lilley is now working on his PhD trying to understand similar seagrass-food security linkages out on Lipsi, a small Greek island collaborating with Archipelagos, a Greek NGO. As part of his work he is trying to change the attitude of people towards seagrass in the Mediterranean. He’s been working with local fishermen and has conducted education sessions in local schools to educate them about the importance of seagrass.