Congratulations to all Computer Science students and staff involved in the Google Hash Competition on 5th March. 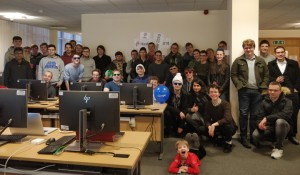 The top scoring team finished 41st in the UK (out of 410) and 557th overall (out of 4856), which puts the team in top 11% overall – a fantastic achievement in this highly competitive event.

Dr Liam O’Reilly, Computer Science lecturer who organised the event along with Bassam Helal who coordinates the Google Hub at the University, comments: “We had a great time, and I’m pleased to say the students groups actually beat the staff team on the day! We are the only official Google hub in Wales – so this achievement is extra special for us.”

Hash Code is a team programming competition organized by Google for students and industry professionals across Europe, the Middle East and Africa, where participants are given a Google engineering problem to solve in just four hours.