A team of researchers led by Swansea University have highlighted a large rift in the Larsen C Ice Shelf in Antarctica which in time will dramatically reduce its area and could affect its stability. 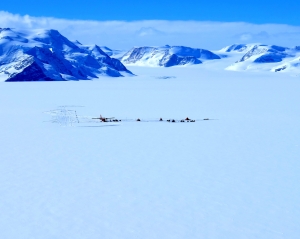 Image 1: The MIDAS project camp on the Larsen C Ice Shelf in November 2014. While we were studying surface melting in the North-West of the ice shelf, we were unaware that a rift was propagating at the other end of the ice shelf. Credit: Nick Gillette, British Antarctic Survey.

Following the disintegrations in 1995 and 2002 of the Larsen A and Larsen B ice shelves on the Antarctic Peninsula, scientists have been keenly studying their much larger neighbour, the Larsen C Ice Shelf, for evidence of change. In new research, submitted to the journal The Cryosphere, a team of researchers led by Swansea University has highlighted a large rift which is growing rapidly and threatens to destabilise the whole ice shelf.

The MIDAS project, funded by the Natural Environment Research Council, and including researchers from the Alfred Wegener Institute in Germany, Aberystwyth University, and the British Antarctic Survey, used satellite data from NASA to detect an acceleration in the progress of a large rift during 2014. When the ice eventually calves away, the ice shelf, with an area two and a half times that of Wales, will be reduced by at least 10% to reach a new minimum. Crucially, using computer modelling, the team has shown that the resulting configuration may be unstable and at risk of further collapse.

Ice shelves are permanent extensions of an ice sheet, several hundred metres thick, which float on the ocean fringing Antarctica. The Larsen C Ice Shelf is the fourth largest in the world.

The impact of an ice shelf collapse will not be felt immediately because the ice is already floating. If a significant area of the Larsen C Ice Shelf is lost, however, ice covering the mountains of the Antarctic Peninsula, currently held back by the ice shelf, will eventually be able to contribute much more quickly to sea level rise.

The development of this rift cannot be attributed directly to climate change, and may be part of a natural cycle of growth and calving. It is, however, the latest in a succession of evidence of ongoing erosion of ice shelves in the region. The Antarctic Peninsula is one of the fastest warming places on Earth and ice shelves are vulnerable to increased melting from both the atmosphere above, and the ocean below.

Professor Adrian Luckman from the Department of Geography at Swansea University, the leader of the project, said:

“It is not possible to predict when the ice will calve away, but when it does, it will be the largest event of its kind since the 1980s. A similar calving preceded the collapse of the Larsen B Ice Shelf in 2002.”

Dr. Daniela Jansen from the Alfred Wegener Institute Helmholtz Centre for Polar and Marine Research, the first author of the paper, said:

“Rifting and calving of this magnitude is not unusual. The critical thing is that our model shows that even for the most modest of projected calving extents, the remaining ice will be significantly less stable than at present.”

The research titled “ Newly developing rift in Larsen C Ice Shelf presents significant risk to stability” can be found on the The Cryosphere  journal website at:  http://www.the-cryosphere-discuss.net/9/861/2015/

Department of Geography at Swansea University:  In the latest Research Excellence Framework (REF), Geography’s research at Swansea was ranked 6th in the UK for research impact and 11th in the UK for research environment.  The Department hosts a large community of postgraduate researchers studying PhD degrees, and run one year MSc courses.  Geography at Swansea is top in the UK with 100%  student satisfaction (National Student Survey 2014). For more information go tohttp://www.swansea.ac.uk/geography/undergraduate 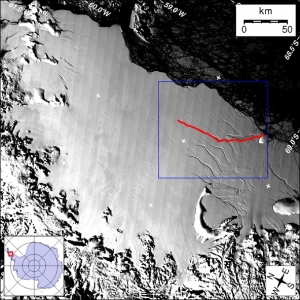 Image 2: This MODIS AQUA satellite image was acquired on 3rd December 2014. The Larsen C Ice Shelf, fringed by the Antarctic Peninsula mountains, is the smooth grey expanse filling the frame. The rapidly growing rift, highlighted in red, threatens to remove at least 10% of the area of the ice shelf. The blue box highlights the area shown in the next figure. Credit: NASA 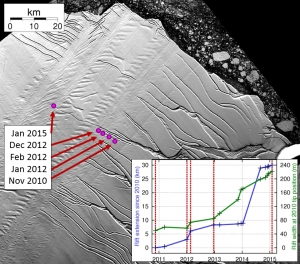 Image 3: In this Landsat image from 4thDecember 2014 the rift can be seen as a dark line in the highly-reflective ice, with pink dots showing its recent progression. Other rifts in the area are dormant. The annotation shows the development of the rift since 2010, in particular the big jump of 20 km during 2014. Credit: NASA