Following an independent process, an external panel of seven assessors, convened by the Coleg Dean, Dr Hefin Jones, concluded that Rebecca would receive the award this year for her extra-curricular contribution to welsh life at Swansea University.

The Gwobr Merêd Award was established in 2015 in memory of Dr Meredydd Evans and acknowledges the contribution of a student who is a current member of the Coleg Cymraeg Cenedlaethol to the Welsh language and culture.

Rebecca comes from Narberth, Pembrokeshire and received her secondary education at Ysgol y Preseli, Crymych. Rebecca is studies part of her BA French and Spanish course through the medium of Welsh at Swansea University and was awarded the Coleg Cymraeg's Main Scholarship. She is now in her final year after spending a year abroad in  Andalucía as part of her course. 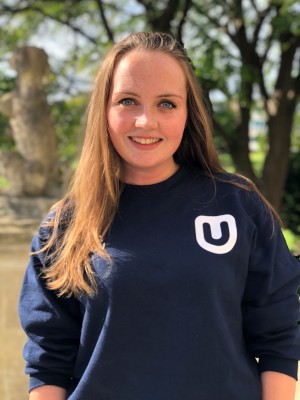 This year, Rebecca was the Welsh Affairs Officer at Swansea University Students' Union as well as being the Swansea Student Forum President and she has been extremely active in the role over the past year. In addition to the above she was a student representative on the Coleg Cymraeg Academic Board and contributed to discussions on behalf of her fellow students.

Lois Griffiths, Branch Officer for the Coleg Cymraeg at Swansea University who nominated Rebecca, said: “Throughout her time at Swansea University, Rebecca has made a remarkable contribution to Welsh life. She has supported various initiatives to promote the Welsh language, be that the educational provision within the university or by contributing to outreach work in schools.

She worked extremely hard on behalf of her fellow students and went over and above. She succeeded in achieving the aim of converting the post to a full time post by steering the process of holding a referendum on the question for the whole student body. Following her tireless efforts, a full-time Welsh Language Officer will be employed in June 2019. Rebecca leaves a tremendous legacy for the Students' Union, the University and the thousands of Welsh-medium students coming through the doors of Swansea University each year.”

Dr Hefin Jones, Dean of the Coleg Cymraeg Cenedlaethol, added: “Every year I am amazed by the standard of nominations received for the Merêd Award. Across Wales, students go the extra mile to nurture and promote the Welsh language in their universities. We are indeed indebted to them. I congratulate Rebecca for her work at Swansea University, and in particular for her contribution to the Coleg's Academic Board. ”

Rebecca said: “It is a privilege to receive the Merêd Award this year. I am delighted that Welsh students have benefited from my actions. The Welsh community within the university in Swansea has been a key element of my time as a student, so it is a pleasure to be able to give something back to this community. Thank you to everyone! ”

Rebecca will receive the award at a special event at the Conwy County National Eisteddfod in August this year.