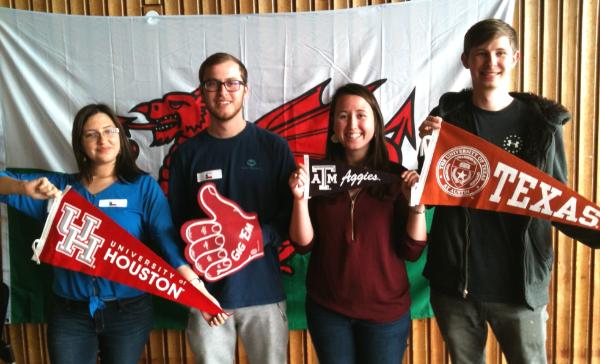 The exchange forms part of a flourishing strategic partnership between Swansea and Texas which also includes research collaboration, joint programmes, knowledge transfer and the exchange of academic staff.

On St. David’s Day, the International Development Office hosted a reception to welcome exchange students to Swansea. We caught up with a few of the Texans to see how they’re settling into life at Swansea.

“I have family in the UK and have been here before so it wasn’t quite as much of a culture shock for me. But I’m still getting used to the fact that our classes are a lot smaller here: we had one that was switched to what everyone called the big lecture theatre, but for me that was just the standard size!”

“The weather is a big difference. It’s been cloudy and raining a lot, whereas we get a lot of hot weather and sunshine back in Texas, Y’all walk a lot here in Wales, which we don’t do so much in Texas. Everything is so much closer together here too.”

"I’m taking public transportation, which is very unusual. I’ve taken buses and trains and it’s a good way of getting about as everything is so compact here compared to Texas. I just went on a train ride and the train had to be stopped because there were sheep on the line! I’m taking the chance to travel as well – last weekend I was in Iceland where they’d just had an enormous snowfall!”

“I love it here, everyone is so friendly and everyone I see has a smile on their face. It’s such a great experience, one that I’ll never forget, and I’ll take it with me when I return home. It’s an awesome five month vacation…and the studying’s great too!”

“I hadn’t heard of Wales originally, but when I heard about the partnership between the University of Houston and Swansea University I knew it was a great opportunity for me. I love the beach and the village vibe…a different world from the city I’m used to. I’m studying English while I’m here, and where better to study Dylan Thomas and William Shakespeare than on their doorstep… I’m even staying a stone’s throw from where Dylan Thomas grew up! It’s a new experience, but one I’m thoroughly enjoying!” 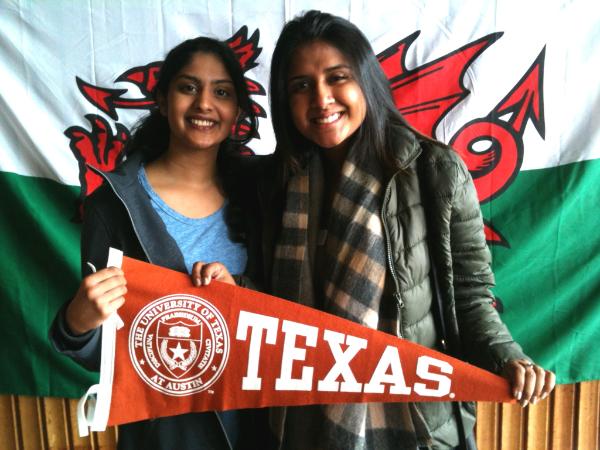 Picture:  Divya and Monica from University of Texas at Austin

"I'm delighted to be able to welcome to Swansea so many students from our Texas partner universities.

We know that spending time overseas is hugely beneficial for students both in terms of both their personal and professional development, and this year almost 100 students have been able to benefit from our Swansea-Texas exchange programme."

Find out more about our Texas links