Professor James Durrant FRS, Sêr Cymru Solar Energy Research Chair within Swansea University’s College of Engineering, is amongst 50 distinguished scientists who have been elected as Fellows of the Royal Society.

The Fellowship of the Royal Society is made up of the most eminent scientists, engineers and technologists from or living and working in the UK and the Commonwealth. 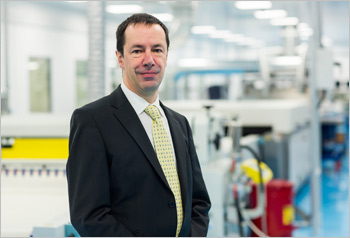 Professor Durrant (pictured) is one of the world’s pre-eminent solar energy research scientists. He joined Swansea University from Imperial College London in 2013 and leads the Sêr Solar initiative based alongside Swansea University’s SPECIFIC project team at the Innovation and Knowledge Centre (IKC), Baglan Energy Park.

Venki Ramakrishnan, President of the Royal Society, said: “Science is a great triumph of human achievement and has contributed hugely to the prosperity and health of our world. In the coming decades it will play an increasingly crucial role in tackling the great challenges of our time including food, energy, health and the environment.

“The new Fellows of the Royal Society have already contributed much to science and it gives me great pleasure to welcome them into our ranks.”

Following today’s announcement by the Royal Society, Professor Durrant said: “I am very pleased and honoured to be elected, and very grateful to all my friends and colleagues in Swansea, Imperial and around the world who have made this possible”.

The full list of the Royal Society’s new Fellows and Foreign Members for 2017 can be found here.