Out of the Shadows: Conference for South Wales pupils about covert action in the intelligence world

What does it mean for a Presidency to be 'Imperial'? Who were the 'Imperial' presidents? How do presidents make decisions in foreign policy? And what happens when those decisions turn into failure, like the Bay of Pigs invasion?

How influential have the CIA and conspiracy theories surrounding the agency been in American history? Did they play a role in electing Donald Trump? What drives Russia's foreign policy? Why and how have the British Secret Services engaged in covert action? How can we understand electoral interference?

Earlier this month (on Friday, September 15), as part of his British Academy funded project ‘Out of the Shadows’, Dr Luca Trenta from Swansea University’s Department of Political and Cultural Studies hosted a conference for schools to try and find out the answers to these questions. 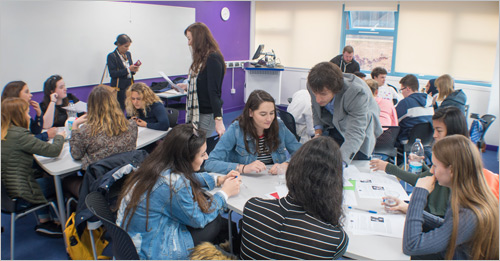 The aim of the conference was to bridge the 'intelligence gap' in school curricula around the understanding of the complex workings of national intelligence agencies and covert paramilitary operations.

The day consisted of talks, debate, role play and mock campaigns, where pupils were asked to 'play' key roles in the 1948 Italian elections – in some groups, the competition was gentlemanly, in others bribery, corruption, assassination attempts and other dirty tricks were all considered!

Dr Trenta said: “Pupils as part of their studies are required to learn about issues surrounding the evolution of warfare, powers of Presidents and Prime Ministers, Cold War and decolonisation, global politics; and yet, intelligence, espionage and covert action are not discussed.

“This conference provided the perfect opportunity to enrich the school curricula and the way the topics above are treated.

“The exciting and often controversial nature of the topics discussed guaranteed that the pupils remained engaged throughout the day, and the role play sessions were a great success. I’d like to thank all who took part for their contribution to a very productive day.”

The ‘Out of the Shadows’ Conference was arranged with the support of the British Academy and the Research Institutes for the Arts and Humanities (RIAH), Swansea University.