Swansea University has been awarded £200K by The Wolfson Foundation to equip a state-of-the-art laboratory at its new Bay Campus, which will be dedicated to facilitating a wide range of research in the field of power electronics and power systems. 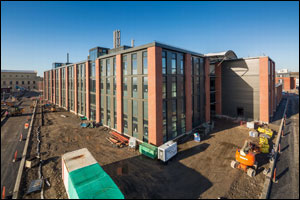 The equipment will enable ground-breaking energy related research through the new Wolfson Power Electronics and Power Systems (PEPS) Laboratory, which will be located within the College of Engineering’s Engineering Manufacturing Centre (EMC) at the Bay Campus (pictured), which opens in September 2015.

The Wolfson PEPS Laboratory will primarily support the work of the University’s Electronic Systems Design Centre (ESDC), a research group in Electrical and Electronics Engineering (EEE) in the College of Engineering, which is recognised internationally for its excellence in power electronics and nanoelectronics research.

The ESDC, led by Dr Petar Igic, has a significant track record in supporting industry through activity ranging from large research projects with leading multi-nationals to working on smaller projects with SMEs.

Research activities supported through the new Wolfson PEPS Laboratory will include power electronics devices and power integrated circuits development, including next generation electronic devices based on novel architectures, or new materials like Gallium Nitride (GaN).

Paul Ramsbottom, Chief Executive of the Wolfson Foundation, said: “The Foundation funds infrastructure underpinning international quality research, and we were impressed by the ambitious proposal from Swansea University. We are committed to funding high quality projects across Wales, and so are delighted to be working with Swansea on this project.”

Welcoming news of the grant award Professor Richard B Davies, Swansea University’s Vice-Chancellor, said: “We are delighted the Wolfson Foundation has chosen to support the University through this grant award, recognising the international importance and innovation excellence of our College of Engineering – as well as the potential for even more remarkable things to come as a result of our Bay Campus expansion.

“The Bay Campus will provide an outstanding environment for excellence in science and innovation, and the new Wolfson PEPS Laboratory will play a key role in helping us deliver the College of Engineering’s research aims and the University’s ambition of becoming a top 200 Global University.

“The area of power electronics and power systems is becoming immensely important globally as a vital part of energy research capable of delivering optimal energy production and distribution.

“The laboratory will facilitate ground-breaking research and will be instrumental in delivering research programmes in a critical area for Swansea.”

Dr Petar Igic, Director of the ESDC at Swansea University’s College of Engineering, added: “Power electronics technology underpins a wide range of applications and markets and is of critical importance to efficient conversion and conditioning of energy.

“Robust and reliable power systems are now more critical than ever in maintaining reliable electricity supplies when the national grid is diversifying its generation sources to include renewables such as wind, photovoltaic and hydro-power.

“The combination of world-class facilities and scientists in an ambitious and expanding College of Engineering at Swansea will undoubtedly lead to new scientific knowledge and discoveries and deliver impact through the open innovation environment being created with the establishment of the University’s Bay Campus.”

The Engineering Manufacturing Centre (EMC) and the Innovation Hub form part of the new engineering quarter at the Bay Campus. They have been part funded by the European Regional Development Fund through the Welsh Government.