Who will take the “Liberty” at Wales’ biggest student sports event ?

Students from Swansea and Cardiff Universities will be returning to Swansea for the annual battle for the 2015 Welsh Varsity Shield. 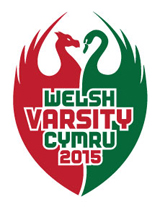 Currently in its 19th year, the Welsh Varsity clash is the biggest student event in Wales, and the second largest varsity games in Britain behind Oxford v Cambridge.

‌Swansea and Cardiff university students will compete in 35 different sports, including: basketball, rowing, golf, hockey and swimming, fencing, squash, and Ultimate Frisbee. The competition culminates in a showpiece rugby match which will be held for the first time in the Liberty Stadium, with an expected crowd close to its capacity, kick-off 7pm.

The events held over 5 days, starting with the boat race on Saturday, take place over 20 venues with 500 competitors from each university, with 430 volunteers assisting. Supporters and competitors from Cardiff and Swansea will be travelling in 213 buses to the Liberty Stadium. Over 8,000 green t-shirts have been printed and 15,000 foam fingers produced for the Swansea University Green and White Army.

St. Modwen will be Swansea University’s main corporate sponsor this year and the company name will appear on the rugby team’s jerseys.

Vice-Chancellor, Professor Richard B. Davies, said: “Varsity is one of the most exciting events in our university calendar; a wonderful part of the student experience on offer at Swansea. Every year, many students take part in this unique event, and many more travel to lend vocal support to the individuals and teams competing.

“St. Modwen is our key partner in delivering our new Bay Campus, which will further enhance student experience by providing a first-class space for teaching and learning. It is great news that they are now our partners in Varsity too and we look forward to further success on and off the pitch.”

The Welsh Varsity rugby match has grown year-on-year since it began in 1997 and matches were held alternatively at Cardiff Arms Park and Swansea's St. Helen’s. Since 2011 the annual rugby showdown has been held in Cardiff but this year is being held in Swansea.

Historically Swansea University have remained the perennial favourites at the Welsh Varsity match, winning 12 times out of a possible 18. With two Wales Under 20 players in this year’s squad, the Welsh Varsity will showcase more young internationals than ever before.

The 10th Welsh Varsity Boat Race, between Swansea University and Cardiff University Rowing Clubs, will take place on Saturday, April 18, on the River Tawe in Swansea.

Established in 2006, the annual boat race sees students from Wales' two premier rowing Universities go head to head in the battle for the title of Welsh Varsity Boat Race Champions.

The day will see four races rowed between competing eights:

‌The races are rowed on the River Tawe, starting just downstream of the Hafod Copperworks to the sail bridge, over a distance of approximately two kilometres

In addition staff from across Swansea University are gearing up for the first ever staff Varsity games – in netball and football – against their counterparts at Cardiff University, which take place as part of the overall Varsity tournament on Wednesday 22 April.

What Does Welsh Varsity Mean to You? Watch our Varsity competitors get fired up in this short video.