Swansea University has won an award for the ‘best online/digital media campaign’ for best practice in publicising a EU-funded project, for the construction and opening of its new £450million Science and Innovation Bay Campus. 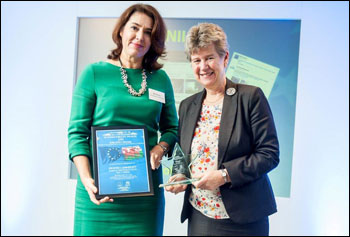 The University was also a finalist for the ‘best photo’ award, for the image of construction at the Bay Campus (pictured below).

Finance Minister Jane Hutt said: “Raising the visibility of the contribution EU funds make to the lives and careers of people and the prospects of businesses and communities is essential.

“I am delighted to see the good work that has taken place and would like to congratulate the winners and finalists for their achievements.”

Alison Parker, Business Marketing Manager for Swansea University, who accepted the award on behalf of the University (pictured above), said: “It has been a true privilege to market the Science and Innovation Bay Campus with our partners. 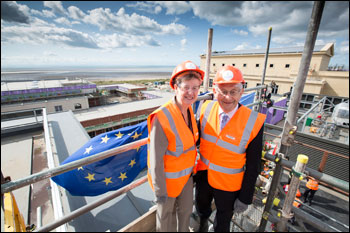 “The support from the Welsh Government, Welsh Higher Education Funding Office and the European Investment Bank accompanied with UK Government funding and private investment has enabled the University to deliver this catalyst project for the Swansea Bay on time and on budget, creating a truly exceptional new campus for the area, Wales and beyond.”

In total, 75 applications were received from organisations across all sectors. This was narrowed down to 11 finalists who were recognised for not only addressing the compliance issues of displaying EU funded logos and referencing EU funds, but also told a story of how vital EU funds made a difference in their area of work.

A full list of finalists and winners of the 2015 EU Funds Publicity Awards can be found here.