University welcomes Secretary of State for Wales to Bay Campus

The Secretary of State for Wales, the Rt Hon Stephen Crabb MP, today (Thursday, January 15) visited Swansea University’s Science and Innovation Bay Campus to view the significant progress made on the £450m development, which is on schedule to open to students in September 2015. 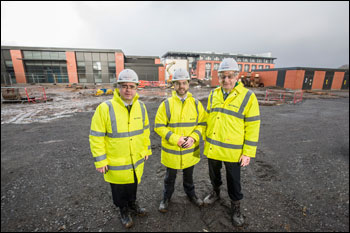 The visitors were escorted on a detailed tour of the Bay Campus’ academic buildings, which included the state-of-the-art Engineering quarter, School of Management and the magnificent Great Hall, which offers sweeping views across the Swansea Bay and when open will be a facility hosting large lecture theatres for students, bar and an auditorium for students, staff and the public to enjoy.‌

Speaking after the visit Secretary of State for Wales Stephen Crabb, said: “The new Bay Campus demonstrates Swansea University's ambition to compete with some of the world's leading institutions, attracting students from across the UK whilst also keeping the best academic talent here in Wales.

"We know that success in the 21st century belongs to those economies that can harness innovation and knowledge. World class universities are vital for achieving that and supporting them is part of our long term economic plan for growth.

"I am confident that Swansea’s expanding University will help give young people the skills they need to succeed and drive the businesses of the future."

Professor Richard B Davies, Swansea University’s Vice-Chancellor said: “The Bay Campus has been recognised as one of Europe’s leading knowledge economy projects and Swansea’s success in the Research Excellence Framework (REF) last December showed we achieved the largest climb up the rankings of any research-intensive University in the UK.

“Ninety per cent of Swansea research was judged to be internationally excellent in its impact, demonstrating our significant, sustained and valuable contribution to the city region, the Welsh economy, and internationally.

“We were delighted to welcome the Secretary of State for Wales Stephen Crabb to the Bay Campus today, to tour the high-quality facilities which will be enjoyed by students, staff, and our industrial partners.

“We were also keen to share with him our anticipation of the greater things to come as we prepare to open the Campus in September 2015. The Bay Campus development, as well as new developments and refurbishments on our Singleton Campus, will allow Swansea to make even greater strides in the future – brining us significantly closer to realising our ambition of becoming a top 200 Global University.”

Following the Campus tour, Mr Crabb addressed a meeting of Swansea Bay Business Club, organised in collaboration with the University on the Bay Campus site, which was attended by around 20 local businesses and who were also taken on a bus tour of the Bay Campus.

PICTURE: (Left to right) Professor Iwan Davies, Pro-Vice-Chancellor, Swansea University; Secretary of State for Wales Stephen Crabb MP; Professor Richard B Davies, Vice-Chancellor, Swansea University. Pictured during the visit to the Bay Campus, which opens in September 2015. In the background is the Institute of Structural Materials (on the left) and The Energy Safety Research Institute (on the right).