A Swansea-based artist and Honorary Fellow of the University, who captured the likeness of Dylan Thomas in his final days, and who also painted figures such as US President Jimmy Carter, has died at his home in Swansea at the age of 91 after a short illness.

Gordon Thomas Stuart was born in 1924 in Toronto, Canada.  Following his education, he worked for a film poster studio before serving in the Canadian army as a volunteer between 1942 and 1946 in Italy, France and Holland.

After the war his passion for art remained, and he returned to Canada where he took a variety of arts-related courses and posts, eventually studying at St Martin’s University of London.   His career included art teaching and lecturing posts in London and Dyfed for thirty years between 1955 and 1985. 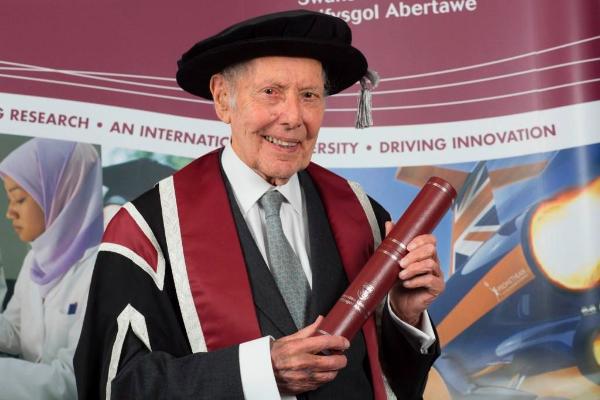 Gordon painted Dylan Thomas at his home in Laugharne in 1953 just prior to the poet’s death in New York.  He described Dylan as delightful and he met him after lunch for sittings on three days in the Boathouse and writing shed at Laugharne. They chatted mainly about George Eliot and films that Gordon had seen.

Gordon Thomas Stuart was presented with an Honorary Degree from Swansea University in 2014, during the ceremony for the College of Law:

On receiving his honorary degree, Gordon Thomas Stuart said: “I am delighted to have been awarded this honour by my local university.  Although I am lucky that my work has taken me all around the world , I have found a real home in Swansea.”

"We are deeply saddened by the news of Gordon Stuart’s death. Gordon was an exceptionally talented and prolific artist with an acute sense of personality and place which he captured beautifully in his paintings.

He was also a great friend of Swansea University and it was with enormous pleasure that we welcomed him officially into our community in 2014 with the award of the prestigious title of Honorary Fellow.

We will remember him not only for his talent but for his warmth, generosity and good humour which were evident to all who met him. Our deepest sympathies are with Mair Stuart and the rest of the family at this very sad time".

Professor Peter Stead, founder and president of the Swansea University-sponsored International Dylan Thomas Prize, sat for two portraits.  He described Gordon as “One of the last links with Dylan Thomas and a major figure in the Welsh art scene whose portraits captured the spirit and soul of great writers and leading world celebrities.” 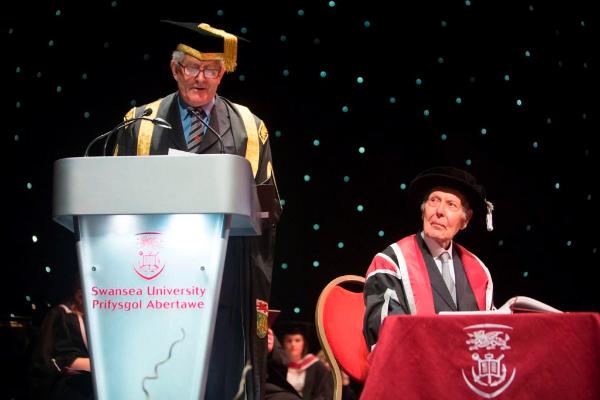