Plans to boost economic prosperity across the Swansea Bay City Region have taken a major step forward. Swansea University has now signed a pledge with Swansea Council that will see both organisations working more closely together than ever to help generate economic growth, create more jobs, improve education and promote a culture of enterprise and innovation.

The agreement was signed after Sir Terry Matthews and Edwina Hart, the Welsh Government’s Minister for Economy, Science and Transport, launched a new City of Innovation brand for the Swansea Bay City Region. 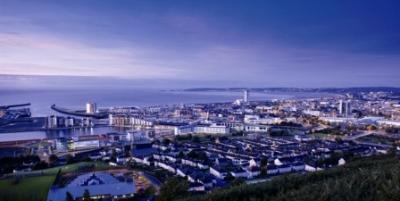 The agreement will build on Swansea University’s expertise in research and innovation and help encourage more trade and investment by tapping into its strategic partnerships in the USA, France and China. The Swansea Bay City Region will be promoted as the UK UNESCO Learning City and a collaborative approach will be adopted to prioritise the spending of European funding in key areas.

Development of the renewable energy sector will be supported, Swansea will be further promoted as Wales’ city of culture and wireless internet connections will be extended.

“This is a highly significant development for Swansea University which will help the region benefit from the opportunities created by a research-intensive university.

Around the world we have seen major economic growth clustered around strong universities and Swansea University can replicate this in the Swansea Bay City Region, working with colleagues in local and Welsh Government.”

“It’s our intention to make the Swansea Bay City Region economy internationally competitive, but we can’t do it alone. This is why partnerships with other local authorities, the private sector and organisations like Swansea University are so important because it means we can tap into their expertise and combine resources to work towards a shared goal.

This agreement is especially timely because it coincides with the launch of a new City of Innovation brand for the City Region. Swansea University will be a key partner as we promote this brand in future because of the scale of its world class research in areas like life sciences, advanced engineering and ICT. This will doubtless help foster and encourage the development of an entrepreneurial culture across the City Region.

The areas of focus we’ve identified in the agreement as a whole will benefit both organisations and help boost economic prosperity, health, wellbeing and citizenship right across Swansea Bay.”

Other areas of focus will include maximising the development opportunities associated with the University’s Bay and Singleton campuses, working jointly on the World Heritage application for Hafod Morfa Copperworks site, and identifying major sporting events that could be attracted to the local area by working in close partnership with the Swans and Ospreys.