Academics at Swansea University’s SPECIFIC project have collaborated with colleagues from Cardiff University on the UK’s first purpose-built, low-cost energy smart house, capable of exporting more energy to the national electricity grid than it uses.

Designed and constructed as part of the Wales Low Carbon Research Institute’s (LCRI) SOLCER project based at Cardiff University, and supported by SPECIFIC at Swansea University, the unique design combines for the first time reduced energy demand, renewable energy supply and energy storage to create an energy positive house.

The house, designed by Professor Phil Jones and his team based at the Welsh School of Architecture, has been built as a prototype to demonstrate how tough targets for low carbon buildings could be met.

Professor Phil Jones, who heads the SOLCER House project said:“The Welsh and UK Governments – and governments across the EU – have set targets for very low ‘nearly zero’ energy buildings by 2020, and zero carbon new housing can deliver this and more. This means that as an academic community we have to rise to that challenge and come-up with innovative new ways to build houses of the future.

“Through this project we have risen to this challenge and used the latest design and technology to build a smart energy positive house. This is the first house in the UK that has been purposely built, using a systems approach, to be carbon positive” he added.

Zero carbon energy performance involves a combination of reduced energy demand and renewable energy supply, using the electricity grid to import and export energy. Electrical and thermal storage have also been used to allow energy generated at the house to be used directly by the occupiers.

The design of the SOLCER House follows the ‘Buildings as Power Stations’ concept developed by the SPECIFIC Innovation and Knowledge Centre and is unique in that it uses a number of technologies and design approaches developed by the LCRI’s Low Carbon Buildings Research Programme. The LCRI project has been part-funded by the European Regional Development Fund through the Welsh Government.

Kevin Bygate, Chief Executive of SPECIFIC, said: “Buildings that can generate, store and release their own renewable energy could be a game-changer. The SOLCER House is intentionally built with the best off-the-shelf, affordable technologies, so it proves what’s possible even now – and there’s plenty more technology in the pipeline.”

The south facing roof comprises of glazed solar photovoltaic panels, fully integrated into the design of the building, allowing the roof space below to be naturally lit. This has been designed to reduce the cost of bolting on solar panels to a standard roof.

The house’s energy systems combine solar generation and battery storage to power both its combined heating, ventilation, hot water system and its electrical power systems which includes appliances, LED lighting and heat pump.  The TSC solar air system preheats the ventilation air which is topped up from a thermal water store. 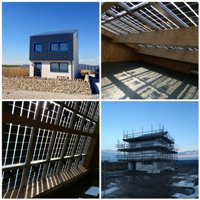 Professor Jones adds: “Now the house has been built our key task is to ensure that all of the measures that we have put in place are monitored to ensure the most energy efficient use. We will use this information to inform future projects with the aim of ensuring that Wales remains at the heart of the development of a zero carbon housing future.

“The building demonstrates our leading edge low carbon supply, storage and demand technologies at a domestic scale which we hope will be replicated in other areas of Wales and the UK in the future.”

The SOLCER House took a total of 16 weeks to construct and was completed in February, 2015.

The house is situated on the site of Cenin Renewables Ltd in Pyle, near Bridgend.