A Swansea University graduate is to honour his late grandfather, who was also a Swansea graduate, with a 1000 km bike ride around some of his grandfather’s favourite places, including Swansea University. The ride is aimed at raising awareness and funds for Parkinson’s Disease. 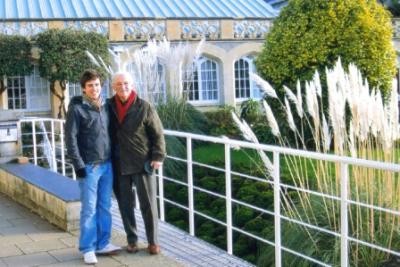 Tom Goodman completed a Geography degree at Swansea University in 2011.   His grandfather, Bernard Wakely, studied English and History at Swansea half a century earlier, before becoming Principal of Coleg Powys Newtown.

Picture:  Tom with Bernard outside the Abbey building at Swansea University

Bernard Wakely died in 2014 after suffering with Parkinson’s Disease.  In his memory, Tom Goodman will be cycling 1,000km around various areas connected with his grandfather’s life, including his favourite mountain, Cadair Idris, and Swansea University. Tom will be joined by members of his family at various stages of the trip. 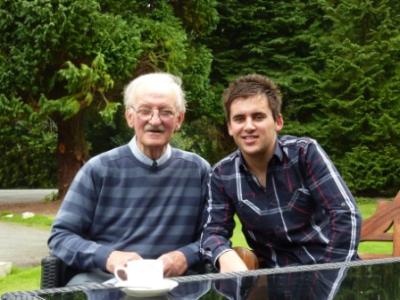 "Grandad played a huge part in my life and meant the world to me.

I have found it hard going since Grandad passed away.  However, spending time and effort in researching areas of Grandad’s greatest interests in his early days has made it far easier.

I hope that in completing the 8 days I will have paid the respect my Grandad deserves and taking in the areas he loved whilst raising awareness of Parkinson's."