Marking 90 years since the birth of Richard Burton, historian and biographer Professor Angela John used a public lecture in Port Talbot to outline the crucial role of teachers in nurturing the talent of promising young actors from the town. 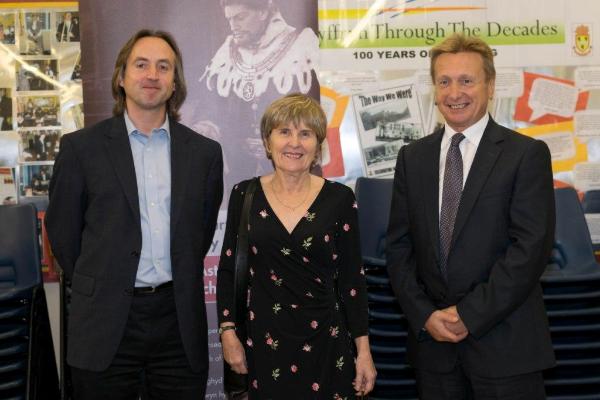 More pictures of the lecture and other Being Human events

Professor John focused on Richard Jenkins (Burton) and his contemporaries and Anthony Hopkins.  She showed how a few farsighted individuals in schools and in youth centres, who were passionate about drama, helped to transform these young people’s lives and opportunities, laying the basis for a town of stars as well as steel.

The lecture was entitled ‘Educating Richard: Actors and Educators in Port Talbot, 1925-55’ and was preceded, fittingly, by a performance of scenes from "A Midsummer Night's Dream" by Dyffryn pupils.

Professor John drew upon her newly published book "The Actors’ Crucible.  Port Talbot and the Making of Burton, Hopkins, Sheen and All the Others" (Parthian, November 2015).

Burton grew up in a world of chapels, opera, eisteddfods, in a town with a vibrant amateur dramatic tradition.   He encountered devoted teachers like Philip Burton, with his links to the BBC, and writers and producers like Leo Lloyd and Cyril Jenkins, a railwayman by profession, who in his spare time ran the YMCA theatre company and adapted short stories from Tolstoy.

These were the inspirers behind the stars.  It is not simply a case of the isolated genius."

After the lecture, Professor Hywel Francis of Swansea University, former MP for Aberavon, on behalf of Sally Burton, Richard Burton’s widow, presented Dyffryn School librarian Jayne Simonson with a French dictionary which was used by Burton as an adult. 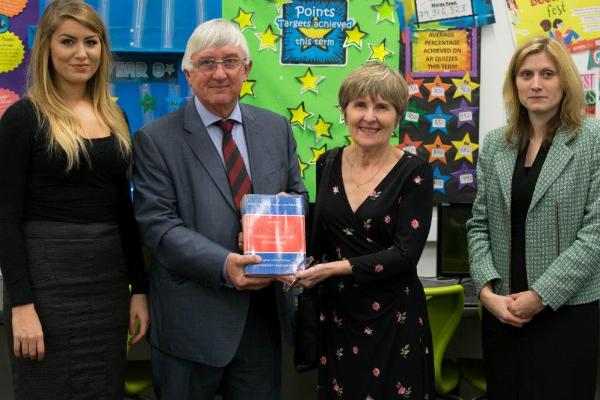 The event was hosted by the Richard Burton Centre for the Study of Wales, a flagship research centre of the Research Institute for Arts and Humanities (RIAH), Swansea University.

Director of the Richard Burton Centre for the Study of Wales, Professor Daniel Williams said:

"The Richard Burton Centre is delighted that eminent historian Angela V. John is delivering this year's lecture.  Her contribution in expanding the fields of Welsh historical and cultural studies is widely acknowledged.

Having innovated in feminist history and in biographical writing, she has returned to her native area in her most recent work which explores the rich cultural matrix out of which Richard Burton, Anthony Hopkins, Michael Sheen and many others emerged.

Professor John is the perfect person to deliver this year's annual lecture, and the topic and location were particularly apt given that Richard Burton received his education at Dyffryn School."

The event was part of the Festival of Humanities, which saw Swansea University serve as one of only 5 UK hubs for events which took place across south west Wales.

After graduating with her doctorate from Manchester, Professor John lectured for almost thirty years, in Kent then in London.  Her first book By The Sweat of Their Brow was a pioneering study of women’s employment at British coalmines.  She also wrote an award-winning book for schools called Coalmining Women.

Professor John is vice-president (and former Chair) of Llafur, the Welsh People’s History Society.   She has been an Honorary Professor at Aberystwyth University since 2004 and now holds that position in the College of Arts and Humanities at Swansea University.