Swansea’s blossoming links with Catalonia were given a major boost by a recent visit by language teaching experts to an English language festival in the region, and by the support of Swansea City football star Angel Rangel, who comes from Catalonia.

Catalonia (or "Catalunya" in Catalan) is an autonomous region within Spain, with Barcelona as its capital and main city.  With 7.5 million people, Catalonia has a bigger population than Wales or Scotland.

The Swansea University experts who visited Catalonia are from English Language Training Services, which runs courses for students from across the world who want to learn or improve their English.

They were visiting Tortosa, a town of 35,000 people which is one and a half hours from Barcelona.  Every year teenagers from the Tortosa area come to Swansea University to follow English courses, and the team’s visit was aimed at strengthening these existing links and creating new ones.

The visit coincided with the 3rd annual Tortosa English Festival, which sees much of the town involved in a series of activities promoting the use of English, including an indoor market, an inter-school debating competition, reading sessions in the local libraries, and even karaoke nights. 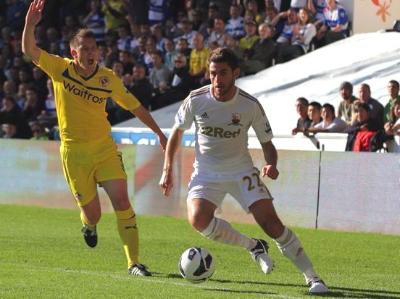 Before the visit, Swansea City football star Angel Rangel visited the Swansea University campus for an interview, which was shown to the Tortosa students.

Angel joined the Swans in 2007 and has been a mainstay of the Swansea defence throughout their astonishing rise to the top half of the Premier League.

“If you come to Swansea you can enjoy the bay and the beaches, with one of them – (Rhossili) in the top 10 in the world.  It’s a very friendly place, and the University attracts people from all over the world.

When I came to Swansea 8 years ago I didn’t speak any English.  I took my lessons, I practised. I watched TV with subtitles, and I read children’s books with my little dictionary next to me.

The most important thing is practising, talking - every day.  Even if you make mistakes, you still learn.”

Watch Angel on campus tell us - in English and Catalan - about life in Swansea, and learning a language

Lisa Langley of the English Language Training Services team, described the Festival as an important step in boosting links with Catalonia:

“We were welcomed with open arms in Tortosa.  The standard of English shown in a town of 35,000 people is quite exceptional.  It was very useful to see where our students come from and to renew our links with many of the students who had been to Swansea to study with us in past years.

The visit helped to strengthen ties with Tortosa and the English language teaching community, as well as creating new ties with Catalonia which will benefit the University as a whole.”

Languages students at Swansea can also learn about the language and culture of Catalonia.

‌Dr Lloyd Davies of the department of languages, translation and communication explains:

"Catalan Studies have a long tradition at Swansea University: Catalan is currently offered to Year 2 and Year 3 students in modules entitled ‘Catalan Language and Translation’ that focus on translation and develop students’ comprehension and writing skills."

"Catalan culture forms a major component of one of our Year 2 content modules, ‘Barcelona/Buenos Aires’.  Barcelona is one of the most cultural and dynamic cities in Spain, and the module investigates the city as a motor of change at the end of the 19th and beginning of the 20th century, focusing on the World Fairs, art and architecture in Modernism, Gaudi in the context of a novel urban environment, and literature that reflects the growing influence of the city."

"Catalan Studies have also formed a major research focus at Swansea University, in particular through the work of Professors David George and Gareth Walters."

Student Ashley Ball, who has been following the Catalan modules, said:

"I personally decided to study Catalan because I have a Catalan girlfriend as well as friends in Catalonia, and although every Catalan speaker pretty much speaks perfect Spanish (Castilian), I still think it's a nice gesture to engage with Catalan speakers in whatever Catalan you know."

"Since studying Catalan I have found I'm able to understand a lot more from French, Italian and Spanish, as well as Latin.  Clearly this is a great thing for language students, even if we're not studying these specific languages, because we all have the passion to be understood and relate to people outside of our normal circle."


Partnership with top-ranking university in Barcelona

UPF is the highest-placed Spanish university in the Times Higher Education rankings (2013), and the only one to make the top 200 in the world.

One of the collaborative projects between Swansea University and UPF was a conference on nationalism which brought together experts in the field.

Read more about the Swansea-UPF link and the nationalism conference