Salmon lice are crustacean parasites that attach to the skin of salmon, causing lesions that can reduce health, growth and survival. Sea lice infestation can also compromise fish welfare and its treatment costs the salmon industry in the region of €300m every year and £30m every year in the UK alone.

The parasite is endemic, and companies across the salmon industry are working together proactively to prevent or reduce the severity of lice outbreaks via appropriate management. Oral and bath therapeutics are used, however lice have increasingly developed resistance. The disease is fast becoming the primary threat to salmon farming, at a time when demand for Atlantic salmon is increasing - from one million tonnes in 2002 to over two million tonnes in 2012.

In the search for a sustainable and effective alternative to use of medicines for treating sea lice, deployment of “cleaner fish” into salmon pens has been investigated.

CSAR has a leading role in supporting this cutting-edge development. Operational Manager Alex Keay and Dr Adam Powell from CSAR explain: “Cleaner fish include a number of fish species that naturally engage in a symbiotic relationship by removing and eating parasites, such as sea lice, from their host.

“The lumpfish, or lumpsucker (Cyclopterus lumpus) is perhaps better known for its caviar, although recently its efficacy as a cleaner fish species, particularly in the cold months during winter and spring, has received attention. 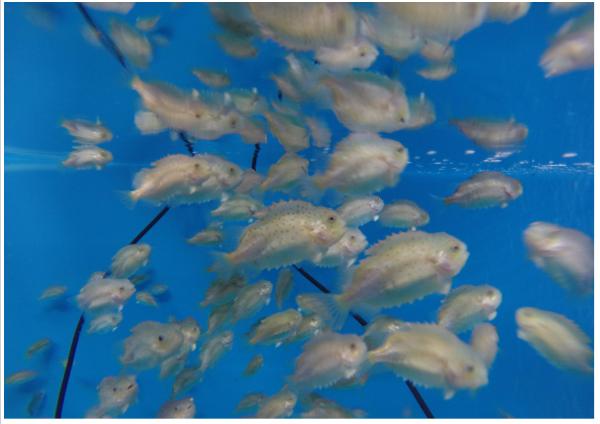 Picture:  lumpfish, which researchers are investigating as "cleaner fish" to help rid salmon of lice.

The project at CSAR brings together industry and academia to further investigate the potential of lumpfish for use as cleaner fish, and to develop methods of sustainable production of juvenile lumpfish for use in commercial salmon farming.

‌Following a pilot scale project in 2014 which yielded approx 8,000 juvenile lumpfish suitable for deployment directly into Scottish salmon pens, CSAR production in 2015 reached in excess of 1.2 million larvae for on-growing at a number of Scottish sites, for a deployment size of 10-15g. A further 130,000 juveniles are currently being raised to 15g at CSAR. These fish will be transported and deployed to salmon farms in Scotland through the autumn.

The project is a five-year collaboration with industrial partners and aims to tackle some of the major challenges that lie ahead in establishing a fully sustainable lumpfish aquaculture sector through improved understanding of this unique species, and promoting welfare of farmed salmon.