As part of a £710,784 research project funded by the Engineering and Physical Sciences Research Council, researchers including Professor Matt Jones from the Future Interaction Technology (FIT) Laboratory at Swansea University have visited Bangalore, the technology hub of India, to explore possible future mobile technologies for resource-constrained users.

The team’s work coincided with the Prime Minister of India’s launch of Digital India, where he spoke of an India where everyone was connected through advanced digital services and technologies.

Professor Matt Jones of Swansea University College of Science, the principal investigator of the project in the UK, said:

“There are hundreds of millions of people in the world who have low access to technology, grid-power, data services, literacy and educational opportunities.”

“This visit enabled user groups that would not normally have access to advanced mobile technology to experience using devices and participate in the development of ideas for the future.

“User groups included auto rickshaw drivers, an after school club and a women’s domestic workers’ collective. As well as studies in Bangalore, similar workshops were held in a township in Cape Town, South Africa and in Nairobi, Kenya. 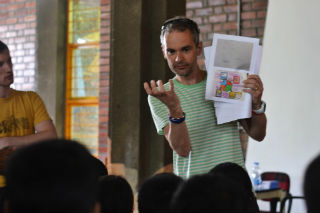 “Also, to enhance relations across the globe, and to showcase the potential and reach of mobile technologies, we sent data to Brynmill Primary School back in Swansea from the Bangalore school club and the Brynmill class responded with their own visions of the future that were relayed to the children in India.”

The data collected on the trip will now be analysed by the Swansea University team.

“The UK, India and Africa has a long track record of working together on innovative research ideas. We expect this project to lead to exciting new opportunities for businesses in the UK in partnership with those in India and Africa to serve the vast numbers of people not yet fully benefiting from advanced mobile technologies.

“What is clear is that there are exciting and interesting ideas in these communities that developers might wish to address.

“These include novel wearable, foldable and embedded technologies.  It seems likely that it is not the case that technologies developed for countries like the UK and USA will be the best and only ones for these groups.

“Working across the globe, we are also excited to see how ideas that come from one region can benefit another.”

EPSRC is the main UK government agency for funding research and training in engineering and the physical sciences, investing more than £800 million a year in a broad range of subjects - from mathematics to materials science, and from information technology to structural engineering.  Funding from this project is from EPSRC grant number EP/M00421X/1.

Find out about Computer Science at Swansea University