After recent success at BBC hack events – winning 3 out of the 4 prizes available at the BBC University #newsHACK challenge – the team of Swansea University budding computer science students received an invitation to attend the 2015 #newsHACK – The News Industry Accelerator. 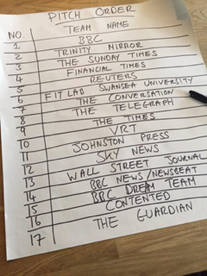 This was an event organized by the BBC and the Global Editors network to bring together news organizations (and the odd academic institution) to consider how we may work together and improve the news industry for UK and global publishers. The contenders included media behemoths such as BBC, The Times, and The Wall Street Journal (full team list below). Naturally, the challenge was accepted. 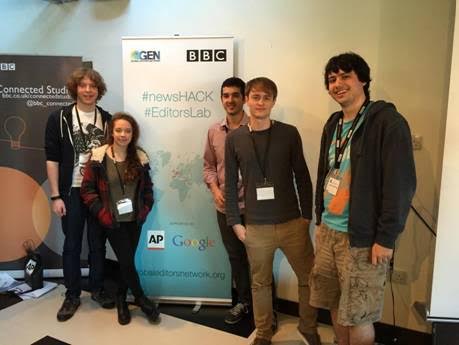 Tim Neate has written a blog about their challenge and lessons learnt:

For our concept we chose to explore the idea of promoting news discussion between members of the public. As opposed to the usual anonymous unconstructive discussion, internet comment boards have become synonymous with, we (inspired by the work of our fellow lab mates Jen Pearson and Simon Robinson) looked into the idea of publicly displaying the news on smartwatches to promote natural discussion of events through icebreakers, for example like we do in a pub or café setting.

Consider our scenario – two people have read the same story in the morning, and when in proximity they both are notified through vibration on the watch. They then look around, and those with a shared story they have both ‘liked’, then their watches glow the same colour and the story and its relevant media items display on the watch. This is then used as an icebreaker - the face-to-face conversation is more fruitful and rewarding than the impersonal online alternative. 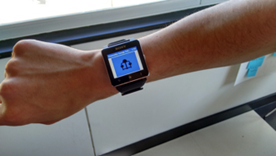 After 2 days of solid hacking, coffee drinking, and getting to know some really great people, out prototype was ready. Our system, shown below, pulled live news stories from the BBC’s Juicer API (a database of articles on the web), and allowed the user to select and read stories on a smart phone. Then once, the stories had been selected, these could be sent to the "Newswatch" smartwatch at intervals.

Then it was for the pitch. This was taken care of by Tim and Cameron, who went for a more ‘unconventional’ pitch in which we motivated our system through our disillusion with online news discussion, and a touch of humour. Judging by the crowd’s response, and that of social media, this went over well. Our ideas were starkly contrasted to the major corporations in that they were more academic, and perhaps quite a disjunct to the current model of the news. We received very positive feedback after the pitch, with numerous organisations taken by our alternative take on the challenge. Saying this, there were some really great and ideas there; most notably the winners - The Times, with their system ‘OneStory’, which was a system for a seamless, cross media experience for those who wish to consume the news in various forms.

Although we did not win, we learned a lot at this event - that even though we were the only team not from a professional media outlet, that by working together with the skills we have gained at university, we could still create an impact. We created something that took people by surprise, and made us think about how we can get people talking in real life, instead of through comments, social media, and other more natural methods.

In terms of further development to our idea, we are currently adding to the prototype we have built and are hoping to be running real-world academic studies, and hopefully working towards the academic publication of our ideas.