Staff from across Swansea University are gearing up for the first ever staff Varsity game – in football – against their counterparts at Cardiff University, which takes place as part of the overall Varsity tournament on Wednesday 22 April.

Varsity is the biggest student sporting event in Wales, pitting over 500 competitors from Swansea against Cardiff in around 35 sports, from archery and volleyball to swimming and taekwondo.

The sports are spread over 4-5 days, but most competitions take place on a single day:  Wednesday 22 April.  The climax of the day is a game between the two universities’ rugby teams at one of Wales’s great sports venues: last year it was the Millennium Stadium in Cardiff, but this year it will be the Liberty Stadium in Swansea, home of the Ospreys and Swansea City FC.

All the Varsity competitions take place in Swansea this year, and staff will also be getting in on the action for the first time.

The football team combines the skills of players from many parts of the campus, from engineering and medicine to alumni and the academic registry.

***Note that the Staff Varsity Netball, due to take place at the LC on Weds 22 April, has been cancelled**** 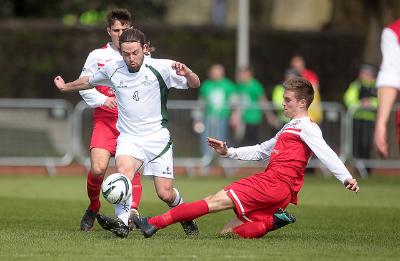 The football team, which is sponsored by the University’s spin-out company Swansea Innovations, has been built especially for this fixture, with 48 hopefuls whittled down through trials to a matchday squad of 16.

The team manager is Ceri Jones, whose day job is director of the department of research and innovation, and who has a background as a player and manager.

Ceri is assisted by colleagues Sean Barr and Rob Lancaster.

Looking ahead to the game, manager Ceri Jones said:

"This promises to be a great occasion and a good chance to bring different parts of the University together.  We have a great blend of staff – from professors to HR staff – on our team, and from different academic colleges."

"We’ve had weekly training sessions and played friendly matches leading up to the game.  The commitment shown by all the team has been excellent."

Ready for Welsh Varsity!  Student competitors tell us what it means to them