Swansea University Cyberterrorism researcher David Mair has recently returned from Ankara in Turkey, where he delivered two lectures at a NATO Advanced Training Course on Terrorist Use of Cyberspace. 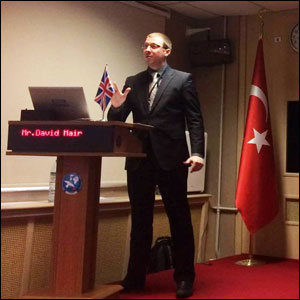 David (pictured, delivering one of his lectures), aged 28, originally from Glasgow in Scotland, who is a PhD student within the University’s College of Law, was the UK representative at the course, which was organised by the NATO Centre of Excellence Defence Against Terrorism (COE-DAT) and featured 12 invited speakers from six countries.

The course was attended by 62 participants from 18 countries, drawn from the military, intelligence services, police, government and other security bodies.

The course director, Dr Major Mehmet Nesip Ogun, of the Turkish Army, said: “In modern terrorism, almost all terrorist organisations are benefitting from the Internet to commit their activities such as message delivering to the masses in the frame of propaganda activities, facilitate communication, and recruit new members to their organisations, raising funds, or to train the new hired members.

“The area of concern, as a consequence of Internet exploitation, has been extended not only in the domestic realm, but also additionally to transnational and international arenas. A full cooperation and coordination of efforts are required to prevent the Internet usage of terrorist organisations.

“In this context, both state and non-state level cooperation must be institutionalised to create a check mechanism. Ever since terrorism and other types of transnational criminal activities have become the main topic in the international arena, the term “cooperation” has become a focal point for every government.”

The course content covered topics such as Terrorist Use of the Internet, and Responding to Cyberterrorism using International Law Frameworks.

David presented two lectures, the first on current academic understandings of cyberterrorism and was drawn from a research study conducted at Swansea University by the multidisciplinary, multi-institution Cyberterrorism Project, and the second on a case study into terrorist use of social media in the case of the Westgate terrorist atrocity in Nairobi, Kenya in September 2013.

Speaking after the visit, David said: “I am very grateful for having had the opportunity to present at this international event on such an interesting and dynamic topic so closely linked with my own research.

“Terrorist of cyberspace has catapulted terrorist groups’ propaganda into our everyday lives and it is essential that we study this phenomenon in order to understand the most effective ways to combat this threat.

“I am very grateful to the University and to NATO COE-DAT for giving me this opportunity to present my own research on the topic and interact with global experts from NATO partner nations.”

And for more information on Swansea University’s College of Law, visit http://www.swansea.ac.uk/law/ or follow them on Twitter at @Swansea_Law.