Donations by grateful patients have helped to foster closer links between Morriston Hospital and Vietnam. 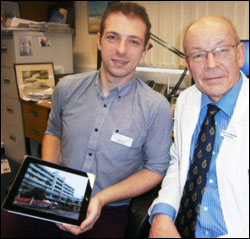 The Swansea Vietnam Fund, set up by Morriston-based neurosurgeon Bob Redfern, has already helped Swansea University College of Medicine student Mark Bevan travel out there, with others set to follow later this year.

He said: “I’m really glad I went. It was one of the best opportunities I’ve encountered as a medical student.

“It was the ability to compare and contrast. The demographic and the way cases are presented were completely different.

“It was an opportunity for me to develop my learning of neurosurgery and patient management too. I saw cases of spinal tuberculosis, which you rarely see over here.

“It has fostered a massive interest for me to develop international medicine as a potential career.”

He made five consecutive annual visits, paying for his own flights and accommodation, to share the knowledge and experience he has gained over the last four decades.

He also set up the Swansea Vietnam Fund, which has helped to pay for small pieces of equipment for the Vietnamese hospital, including drill bits, a new computer and bone biopsy equipment.

Additionally, the fund sponsored a visit by its head of neurosurgery department, Dr Ngoc Ba Nguyen, to Morriston Hospital.

Although Mr Redfern was unable to go last year, the fund part-sponsored Mark so he could continue the link with Swansea. 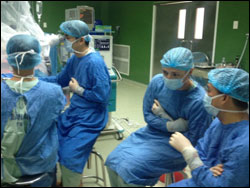 Mark, who spent six weeks in Vietnam, said: “What I found was that while the theatre practice was very similar to ours, the patient group is different.

“The patients are very poorly educated but uncomplaining. They sometimes have to share beds but they are all very grateful for the care they receive.”

Four more medical students will follow Mark’s example when they leave for Vietnam this July.

Mr Redfern said: “Two will be assisted by the fund as it can only be used if they want to do something involving neurosciences.

“Even though they will have to fund themselves they are still able to use the contacts I have developed out there.

“The medical students in Swansea are some of the best we’ve come across. They are really motivated and if they see a good opportunity they will jump at it.

“If students want to go out there, and there’s the opportunity to do it, we should try to encourage them – it’s all about the cross-fertilisation of ideas.”

Mr Redfern said the fund had benefited from some incredible generosity by the public.

Last year, for example, Cardiff couple Tom and Tamsyn Webster asked their wedding guests to make donations to the fund in lieu of gifts.

That was because Tom, who had degenerative disc disease in his lumber spine, could not have walked without Mr Redfern’s surgical skills.

Mr Redfern said: “Since then I’ve had someone walk into my clinic and hand over a cheque for £1,000. They told me it was something they had been meaning to do for some time.”

If you would like to donate to the fund you can send cheques (made payable to The Swansea Vietnam Account) to Mr Redfern at Morriston Hospital, or directly to Lloyds Bank: sort code 30-93-53, account number 26599560.

Image 2: Mark Bevan (second right) in discussion with a Vietnamese colleague during an operation in Da Nang Hospital.