A Nepali-born member of the Swansea University library team played a vital role in co-ordinating medical teams in Kathmandu during the earthquakes that struck his home country earlier this year, with support from his Swansea University colleagues.

Kush Budha, who has lived in Swansea since 2006, works in Swansea University’s library, having spent time here as a student.

He retains close ties with his home country, and helps run a foundation which supports projects in his home village, Jhumlawang.  The village is in Rukum, in the Rapti zone of mid-western Nepal, over 2300 metres above sea level: getting there from Kathmandu requires a road trip of around 24 hours by bus and jeep, and then a three-hour walk.

Kush was on his annual trip home to Nepal, visiting family and friends in his village, when the earthquake struck. 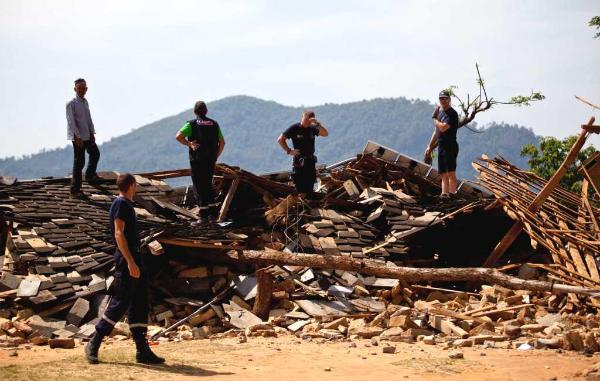 Picture: one of the teams coordinated by Kush surveys some of the earthquake damage

The epicentre of the 7.8 magnitude earthquake was Lamjung District (north-west) of Kathmandu.  Over 8856 people were killed, with 22,039 more injured, and almost 3 million people displaced, according to the UN.

“It happened around midday and I could see the houses and trees shaking.  I ran out of the house to see what was happening. My instant reaction was that a lot of people must have died.

Fortunately there wasn’t much major damage to our village, though of course phone links and mobiles everywhere were out of action so we had no way of telling people we were ok, or of finding out what was happening elsewhere.”

His family and friends in the village were safe, so Kush decided to go to Kathmandu to help.  A long journey under normal circumstances, the trip was made more difficult by the landslides caused by the earthquake.

Emergency help for the people of Kathmandu

Kush described the scene as he reached Kathmandu:

“As we were arriving, we saw streams of people leaving.  It was eerie and dark as the street lighting was out.   Everywhere, buildings had collapsed, and people were living in tents on the side on the road.”

Kush had contacts in Kathmandu, including people from the Jhumlawang Foundation. Given their international connections and the fact that they spoke English and Nepali, they decided the most effective way they could help was to co-ordinate the many offers of help from medical teams from Nepal and around the world.

They set up an office and a crowdfunding site, which went on to raise £7000. 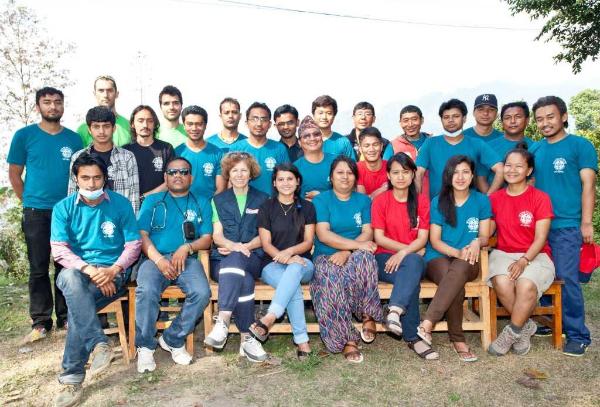 Picture:  some of the many medical staff who volunteered to help, co-ordinated by Kush and his team

“To provide the best possible medical services at that time for earthquake survivors, we needed to sort out basic logistics, like medicines, transportation, food and tents for our medical team members and volunteers. So, we collaborated with trekking companies who provided us with tents.

We were able to do all this because of the funding that we received from my colleagues in Swansea University and generous people from across the world.

Then we also had to co-ordinate the many offers of help that were coming in.  For example we had to work out who we should deploy where, and which medicines are needed where”.

Kush and colleagues were able to deploy 54 volunteers grouped into 4 medical teams, including:

The teams gave medical help to over 1362 people injured in the earthquakes.  A second major earthquake struck in May, and some of the teams were able to help with this one too.

Investing in a community's future

Now back in Swansea, Kush said that he is continuing to support his home country through his work with the Foundation, investing in people and infrastructure.

The Foundation has recently built a new school in the village – designed to withstand earthquakes - with the teacher funded by the community itself.

See pictures of Jhumlawang and the work of the Foundation 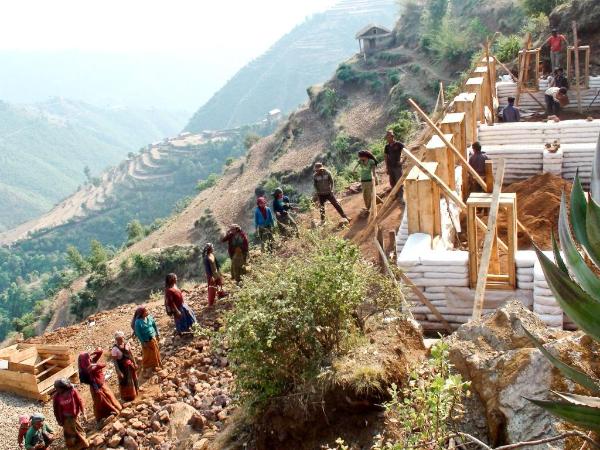 Picture:  the people of Jhumlawang building their school, with support from the Jhumlawang Foundation.  More pictures.

Kush explained that the work of the Foundation is a partnership between the people of the village themselves and donors and supporters.

“We like to do whatever we can ourselves.  For all the projects we work on –like the new school – community members must contribute at least 25% of the total budget.  The rest of the funding is arranged by the Foundation in collaboration with its own diaspora members, like-minded individuals and organisation within the country and abroad.

We ask ourselves what resources do we have?  What do we lack?  And then we say to our partners, “here’s what you can do to help”.

Our community’s livelihoods are based on traditional agriculture and livestock.  So, to support them, we have sent 3 girls from the village on a full scholarship to study to be Junior Technical Assistants in Agriculture and Animal science.  On their return, they will be based in the community, supporting farmers. Our village and neighbouring villages will benefit from their services."

Help from the Swansea University team

Kush also thanked his Swansea University colleagues for their support for his efforts:

"My colleagues have been extremely supportive throughout.  I was able to get extra time off to stay in Nepal and help.

The team in the library and colleagues from elsewhere on campus, such as Residential Services, helped raise funds, holding a cake sale for example. Support like that is vital in enabling me to help my home country in its time of need." 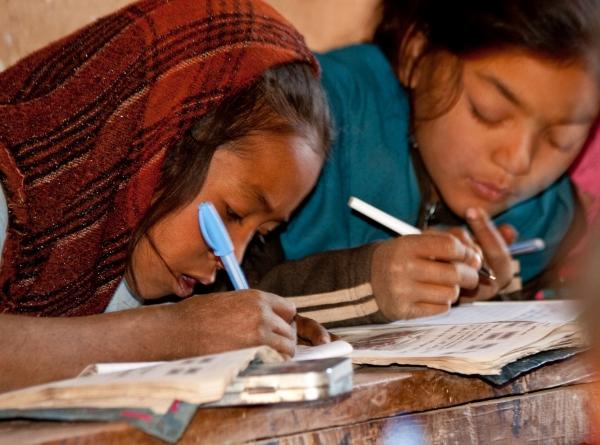 Picture:  investing in the future of Jhumlawang - girls concentrating on their work in the new school

Find out more about the Jhumlawang Village Foundation