Links between Swansea University and China, from medical research to education and staff development, are on the horizon thanks to the opening of a new joint medical centre at Wuhan Union Hospital, which was founded in 1866 by a Swansea-born missionary, the Reverend Dr Griffith John.

The Centre was opened in a ceremony in Wuhan, China, attended by leaders from Swansea University and the Wuhan Union Hospital, and by the UK Consul General.  It will promote clinical and life sciences research, and build student and staff exchanges and education collaborations through an annual Medical Forum, a professional association, publications and collaborative projects. 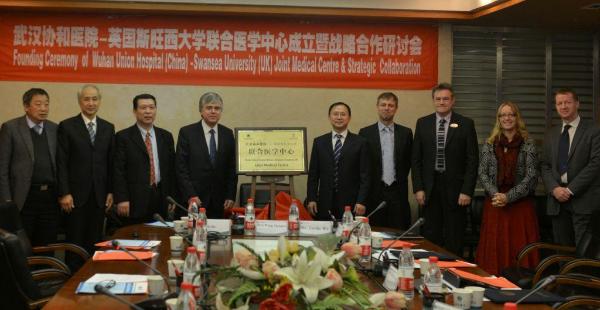 Picture: The Swansea and Wuhan Union delegations at the opening ceremony for the new medical centre

The new Centre builds on the formal collaboration between Swansea University and Wuhan Union Hospital, initiated in 2012, when a delegation from Union Hospital and Huazhong University visited Swansea to present a copper bust of Griffith John to the city. The bust is permanently displayed in Swansea Museum.

Wuhan is a fast-growing city of 8 million people on the central China plain.  It is on track to become the third-largest city economy in China by 2025.  The UK government has just opened a new Consulate in Wuhan, aimed at boosting opportunities for UK links, especially in the healthcare, education and low-carbon development sectors.

The Wuhan Union Hospital, one of China’s biggest, has over 5,000 in-patient beds.  Each year the hospital staff care for 3.5 million outpatients, admit 158,000 patients, and carry out 72,000 operations.

"Swansea University is a global university.  We are pursuing an ambitious internationalisation strategy and developing deep partnerships with great institutions with world credentials.

Overseas partners are crucial to our continued success as a University, benefitting our research and our staff and students.

This new Medical Centre at one of the leading teaching hospitals in China opens an exciting new chapter in Swansea’s longstanding links with Wuhan, which is also one of China’s fastest-growing cities.

By promoting clinical and life sciences research collaborations, and encouraging student and staff exchanges, I am confident that the Centre will realise significant research, humanitarian and health discoveries, whilst at the same time building on the historical links between Swansea and Wuhan."

“The Centre provides exciting opportunities for more wide-ranging medical research, clinical and educational collaborations between the UK and China.” 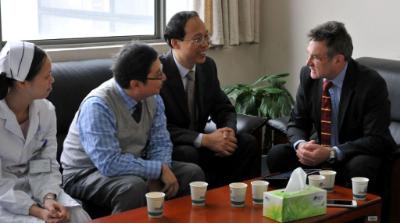 The opening ceremony was held in Wuhan, China on 8th December 2014. Professor Guobin Wang, the President of Union Hospital, Professor Luo Qingming, Deputy President of Huazhong University of Science and Technology, and the Consul-General of the British Consulate in Wuhan, Mr Nick Whittingham, hosted the event. The delegation from Swansea University included Pro Vice Chancellor Professor Iwan Davies and the Head and Dean of the College of Medicine, Professor Keith Lloyd.