Sugar is the latest dietary demon, but is it really as bad as the headlines suggest? How much is too much? And how can we know how much we are consuming anyway? 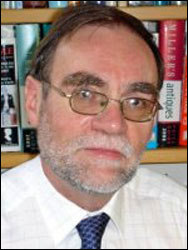 Professor David Benton, of Swansea University’s Department of Psychology in the College of Human and Health Sciences, has been invited to take part in an expert panel debating these and other questions in an hour-long event this week, as part of this year’s The Times Cheltenham Science Festival.

Professor Benton, who specialises in the study of the influence of nutrition on psychological functioning, specifically on memory and mood, will join panellists Catherine Collins, Principal Dietitian for St George's Hospital NHS Trust, and Professor Graham MacGregor, Professor of Cardiovascular Medicine at the Wolfson Institute, Queen Mary University of London and Chairman of Action on Sugar, to separate fact from fiction and debate what should be done about sugar.

The event will take place from 1:30pm until 2:30pm on Friday, June 5, in Cheltenham Town Hall’s Pillar Room.

Professor Benton’s research was included as part of Swansea University’s submission for the Research Excellence Framework (REF) 2014, which saw University soar up the league table to 26th in the UK, with the ‘biggest leap among research-intensive institutions’.

Swansea University is again a Major Supporter of The Times Cheltenham Science Festival, the UK’s largest and most prestigious science festival, which runs from Tuesday, June 2 until Sunday, June 7.