The lost Dylan Thomas notebook, rediscovered after lying forgotten in a drawer for decades, is to go on display to around 200 members of the public in Swansea at an event on Thursday 14 May, marking the inaugural International Dylan Thomas Day. The notebook was bought by Swansea University and is to be kept in the Richard Burton Archives.

The notebook, which came to light recently and was put up for auction at Sotheby’s, is one of five used by Dylan Thomas – the other four are in the State University of New York at Buffalo.

Professor John Goodby of Swansea University, international Dylan Thomas expert and editor of the centenary edition of his poems, described it as “the holy grail of Thomas scholars” and the most exciting discovery since the poet’s death in 1953. 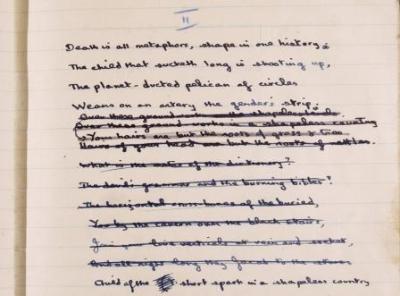 Picture:  a page from the notebook, showing how Thomas edited his work

The 14 May event is a rare opportunity for the public to see this magnificent, recently-discovered artefact.

It will be complemented by an exhibition including original Dylan Thomas photographs, Dylan’s first ever published poem, and rare proof copies of several of his works, generously on loan from Dylan’s Bookstore.

The notebook will be on display in a protective glass case throughout International Dylan Thomas Day with plasma screens showing the whole of its contents.

•    Entry is timed, in half-hour slots, with a maximum of 20 places available for each slot

•    It is free of charge and open to all, on a first come first served basis

How to book your place:

•    There are regular bus services to Swansea University campus throughout the city and region.
•    Limited parking is available via the pay and display car park on the University campus; with further parking in the Pub on the Pond and at the Recreation Ground in St Helens. 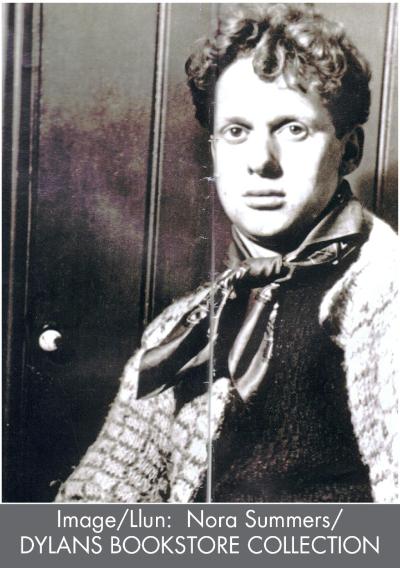 The public event will be preceded by the official opening at Swansea University of International Dylan Thomas Day, which is funded by the Welsh Government and celebrates the life and work of Dylan Thomas.

It will be held each year on 14 May, the date Under Milk Wood was first read on stage at 92Y The Poetry Center, New York in 1953.

“As the University is in the poet's birthplace, and sponsor of the International Dylan Thomas Prize, it is fitting that we have been able to ensure that this notebook stays in Wales.

The notebook will be a wonderful addition to our already extensive and important archive collection."

“It’s fantastic that the first International Dylan Day has such an exciting line up of events across the world and I’m pleased that the Welsh Government has been able to support this first year.

The announcement that the University had successfully bid for the Notebook was a wonderful conclusion to a year of celebration in 2014 and it is very fitting that the Notebook is also open to the public today.

This day will become a legacy for the festival and the interest which was shown in Dylan Thomas and Wales during the centenary celebrations will keep its momentum through this annual focal point.”

‌Jeff Towns, owner of Dylan’s Bookstore, who successfully bid at the auction on behalf of the University, said:

“The falling of the gavel at Sotheby's last December was the beginning of a journey which culminates on International Dylan Thomas Day with this incredible, previously unseen poetry notebook on view for the first time here in the town where it was written, to be marvelled at, studied and enjoyed.

For this to happen on the first ever International Dylan Thomas Day adds to the whole occasion.  The accompanying exhibition taken from Dylan’s Bookstore’s current holdings provides additional background to this notebook and Dylan’s future development.” 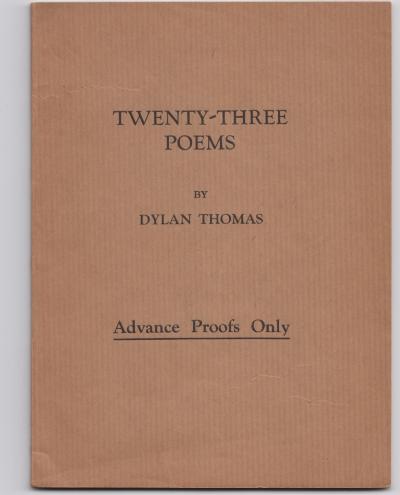 The notebook will be kept in the University’s Richard Burton Archives, which already house Burton’s diaries and other papers, bequeathed to the University by his widow Sally, and other important items including the papers of academic and writer Raymond Williams, and the South Wales Coalfield Collection.

The archives are open to all by appointment.

Book your place for the notebook exhibition online here