Rory Wilson, Professor of Aquatic Biology/Sustainable Aquaculture at Swansea University, will share his research and fieldwork experiences at this week's The Times Cheltenham Science Festival. 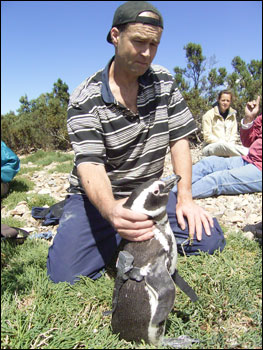 On Sunday, June 7, Professor Wilson will join Lucy Cooke, zoologist and BBC Nature’s Boldest Thieves/Talk to the Animals presenter and Simon Watt, biologist and co-presenter of Channel 4’s Inside Natures Giants, to discuss six really cool animals which thrive in the frozen polar tundras of Antarctica and the Arctic, and in the surrounding icy seas.

The Festival’s Penguins, Narwhals and Other Really Cool Animals (S145) event takes place from 8:30pm until 9:30pm, in the Winton Crucible, Imperial Square.

Professor Wilson is Head of the Department of Biosciences at Swansea University’s College of Science and leads the Swansea Laboratory for Animal Movement (SLAM) research group.

Professor Wilson said: “During the event, I’d like to think that I will be able to surprise people about penguins. They are quite, quite extraordinary animals, even beyond what we already know.”

Professor Wilson’s research reflects his interest in how free-living animals modulate the energetic costs they have for activities (including incidences, extents and intensities of activities) according to their environment and particularly how animals manage their time and energy to forage most effectively.

His research focuses on seabirds, especially penguins, but he is also involved in work with marine mammals, turtles, terrestrial and arboreal mammals and terrestrial birds. 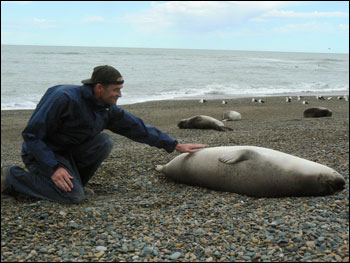 His research has been funded by organisations including National Geographic, the Royal Society for the Protection of Cruelty to Animals, Wildlife Computers, and the Oiled Wildlife Care Network, and he works with research collaborations in South Africa, Argentina, Costa Rica, Australia, and Europe.

In 2006, Professor Wilson was awarded a Rolex Award for Enterprise to develop and test an electronic tag to track the movement of marine and land animals.

Now rolled out commercially, the ‘Daily Diary’ has revolutionised animal tracking and was used extensively by National Geographic in the production of their ‘Great Migrations’ series, on which Professor Wilson acted as Chief Scientific Advisor.

Professor Wilson’s research was included as part of Swansea University’s submission for the Research Excellence Framework (REF) 2014, which saw University soar up the league table to 26th in the UK, with the ‘biggest leap among research-intensive institutions’.

You can read more about his work in the REF2014 case study entitled ‘Public understanding of long-distance animal movements: Great Migrations’, which can be found here.

Swansea University is again a Major Supporter of The Times Cheltenham Science Festival, the UK’s largest and most prestigious science festival, which runs from Tuesday, June 2 until Sunday, June 7.