Huw Lewis, AM, Minister for Education and Skills has visited Swansea University to see pupils be inspired at the Further Maths Support Programme (FMSP) Wales Year 10 Conference organised by The Wales Institute of Mathematical and Computational Sciences (WIMCS). 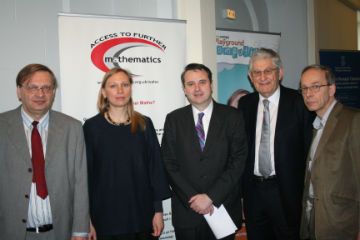 The Conference, attended by 200 students from local schools took place at Swansea University on Thursday 12 March.

Mr Lewis was greeted by Swansea University Vice-Chancellor, Professor Richard B Davies who accompanied him to two of the workshops organised on the day.

Huw Lewis said: “Maths is a key skill for life and highly valued by employers. That’s why we are investing in the Further Maths Support programme.

“It was great to visit the Wales Institute of Mathematical and Computational Sciences at Swansea University and see the work they are doing on the programme. I was really struck by the enthusiasm of all the students I met. I hope the event has encouraged them to consider continuing studying Maths beyond GCSE level.

“Indeed, it is recognised that an A/AS level in Further Mathematics enables students to be better prepared for studying Mathematics in their first year at university and opens doors to well paid, high value STEM (science, technology, engineering and mathematics) careers”.

Professor Richard B Davies said: “We have been delighted to welcome Huw Lewis today to showcase the work carried out by the Wales Institute of Mathematical and Computational Sciences and to demonstrate that this Welsh Government funded programme is going from strength to strength.”

“There is a chronic shortage of people who have higher level mathematical skills and this is evident in the higher salaries offered in careers varying from Actuaries to Engineers.  It is therefore vital that we foster an understanding of Mathematics in students at GCSE level so that they can be encouraged to consider Maths as an option in their further education.

“The Further Maths Support Programme presents Mathematics as a fascinating and appealing further education option.  This is evident from the feedback received from the students who attended today.”

Dr Sofya Lyakhova, FMSP Wales Programme Leader said: “Student conferences are a very important part of the FMSP Wales programme as they not only promote studying Mathematics beyond GCSE level but also give insight into various careers and application of Maths. 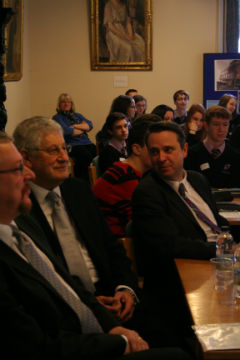 “The workshops students saw today covered very pure areas of Maths such as golden ratio and infinite sets as well as mathematics modelling of the spread of diseases. Students saw examples of how a small task can be enhanced by using Mathematics.  There were plenty of competitions and quizzes but at the end everyone was a winner as we all learned some new mathematics. Let Maths take you further!

“Mathematics is very beautiful and challenging but is also very practical and leads to some exciting careers. Student conferences contribute to widening students horizons and we hope for some of them this may be a life changing experience.”