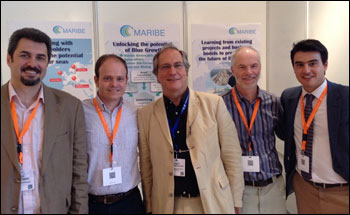 The 18-month MARIBE project, funded by the European Commission, is led by a consortium of 11 partners coordinated by University College Cork.  The project’s primary aim is to determine how best to unlock the potential of the off-shore economy (Blue Growth) in terms of sustainable growth and jobs.

Blue Growth (BG) includes Marine Renewable Energy, Aquaculture, Marine Biotechnology, Seabed Mining, and combinations by area and platform, and unlocking the potential of Blue Growth is at the heart of the Integrated Maritime Policy, the EU Innovation Union, and the Europe 2020 strategy for smart, sustainable growth.

MARIBE links and cross-cuts with the Transatlantic Ocean Research Alliance and the Galway Statement by reviewing the three European basins – Atlantic, Mediterranean, and Baltic – as well as the Caribbean Basin.

Potential of the blue economy

The two-day European Maritime Day Conference brought together more than 1,300 participants to discuss the potential of the blue economy.  It hosted high-level sessions and stakeholder workshops, attracting delegates and experts from across Europe and beyond.

Speakers, including Ministers, Commissioners, CEOs and experts, discussed the spectrum of opportunities and great challenges that our coasts and seas present.  They shared best practices and developed new synergies.

‌Stakeholders took the opportunity to visit the MARIBE stand to learn more about the project from consortium members, including Dr Dimitrios Pletsas, Collaborative Projects Officer in the Marine Energy Research Group at Swansea University’s College of Engineering.

Dr Pletsas said: “MARIBE is an exciting new project and we are presented with the opportunity to play a significant role in Europe’s quest to create new profitable businesses around the most valuable resource of all, the ocean.

“As BG sectors are progressing and preparing to contribute in Europe’s economy we are looking to maximise their potential impact by assessing BG combinations with multiple-use of space and multi-purpose platforms, and ultimately produce detailed business plans for market test pilot projects.”

In February 2015, Welsh Government Finance Minister Jane Hutt announced funds of nearly €170,000 had been approved by the European Commission and would be invested in Swansea University through the €2m Marine Investment for the Blue Economy (MARIBE) project.