Professor Martin Sheldon of Swansea University’s Medical School has been awarded this year’s Schofield Medal by the University of Guelph’s Ontario Veterinary College (OVC), the oldest veterinary school in Canada. 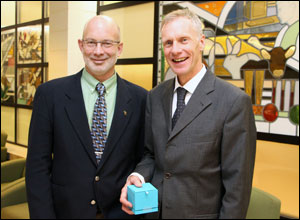 Professor Sheldon, whose research focuses on reproductive immunology, was awarded the Medal after delivering the 2015 Schofield Memorial Lecture at OVC last week on the subject of “A Trail in Discovery from Animal Disease and Infertility to Innate Immunity”.

Previous recipients of the annual award include Nobel Laureate Dr Peter Doherty (1991) and many distinguished scientists working on infection and immunity.

Professor Martin Sheldon worked in clinical practice for 14 years as a food animal veterinarian before moving to the Royal Veterinary College, London, where he participated in clinical teaching and developed his research interests in the molecular mechanisms of infection and immunity. 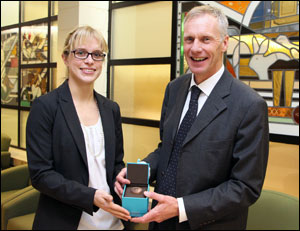 After completing his PhD in 2002, using a combination of clinical and laboratory studies, Professor Sheldon received a Biotechnology and Biological Sciences Research Council (BBSRC) Research Development Fellowship in 2006.  He moved to full-time research and studied fundamental questions about the biology of infection and immunity.

In 2008, he established a laboratory at Swansea University’s Medical School focusing on reproductive immunology, and studies microbes and immunity in the female genital tract.

The fundamental mechanisms of host-pathogen interactions are very similar between animals and humans and Professor Sheldon's research aims to uncover the mechanisms of microbial infection, inflammation and immunity.

His research focuses on dairy cattle where uterine disease after parturition (the process of giving birth) affects about 40 per cent of animals each year, compromising animal health and causing infertility.

His laboratory’s research work has led to new therapeutic strategies, currently in clinical trials, to combat uterine disease in cattle.

Professor Sheldon’s research was recognised with the award of Fellow of the Royal College of Veterinary Surgeons in 2013.

Speaking after receiving the Schofield Medal, Professor Sheldon said: “I was delighted and honoured to receive this award for research which has real-world impact, and I greatly enjoyed my visit to OVC and Canada to give the 2015 Schofield Memorial Lecture.”

Dr Gordon Kirby, OVC Associate Dean, Research, said: “The Schofield Lecture is one of the highlights of our academic year and honours one of Canada's great scientists, Dr Francis Schofield.”

“It is also another example of how Swansea University's Medical School is becoming internationally recognised as a centre of excellence in life sciences and health research."

The Schofield Memorial Lecture is dedicated to Francis Schofield, a colourful and influential pioneer of veterinary medicine in Canada.  Schofield emigrated from England as a teenager and entered OVC in 1907.  Soon after graduation he travelled to Korea as a Canadian missionary to teach Bacteriology.  Due to his activities in the defence of the Korean people against Japanese occupation, he left Korea and returned to OVC in 1921 where he worked for 33 years.  On retirement he returned to Korea to work for the College of Veterinary Medicine in Seoul.  In recognition of his distinguished services to Korea’s Independence, Dr Schofield became the only non-Korean to be buried at the National Patriot’s Cemetery.

While Schofield had many significant contributions to veterinary research in the first half of the 20th century, undoubtedly the most important was his discovery of an anti-thrombin substance in spoiled clover. His observation that only calves fed spoiled clover eventually haemorrhaged, revealed a problem with blood clotting factors.  The compound dicoumarol was eventually identified and developed into the anticoagulant drug warfarin.

Schofield’s discoveries were not serendipitous or anecdotal but based on meticulous scientific inquiry. Schofield’s systematic approach to veterinary science and his evidence-based campaign to promote best veterinary practice and improve health outcomes foreshadowed the acceptance of this approach as current dogma in both human and veterinary medicine.

The Schofield Memorial Lecture celebrates Frank Schofield’s life, his research and his role as a motivational icon who has undoubtedly inspired the many subsequent research achievements at OVC. Dr Schofield provides us with the incentive to achieve the highest standards of effort, intellect and ethics, to practice evidence-based medicine and to strive towards translation of our scientific discoveries into effective advances in both animal and human health.