Nothing was going to stop Morriston Hospital’s Andrew Jones, who is a clinical tutor in Swansea University’s Medical School, cycling to Paris in four days to raise money for charity – not even surgery. 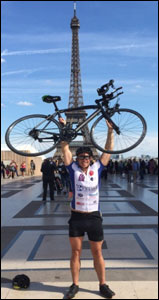 Super-fit Andrew put in countless hours of training but that was halted two months ago when he had testicular surgery to remove a non-malignant growth.

Doctors told him he wouldn’t be able to cycle for eight weeks after the operation. No sooner were the eight weeks up than Andrew and friends were cycling to Paris – raising £52,000 for Tenovus.

Andrew, who took part in a triathlon in his home town of Carmarthen the day before the operation, said: “A group of us decided to raise money for a cancer charity. We decided to do a bike ride to Paris, from the Millennium Stadium to the Eiffel Tower.

“So after the eight weeks were up I did a 30 km ride just to make sure I could sit on the bike – then it was off to Paris.

“It was a sponsored ride involving 40 of us, mostly from the Carmarthen area and with a few from Cardiff.

“Amazingly we raised £52,000 for Tenovus. I still cannot believe how much money we raised.” 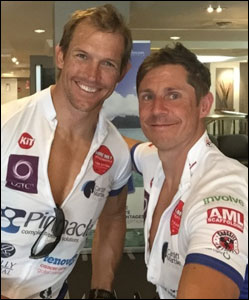 Andrew and friends, including Llanelli, Wales and British Lions star Dafydd James (pictured on the left of the picture with Andrew), completed the near-500km route over four days.

Although their finishing point was the Eiffel Tower, Andrew went a little further, braving the traffic around the Arc de Triomphe and along the Champs Elysees.

The 40-year-old previously played rugby for Carmarthen Quins. He retired at the end of the 2013-14 season when the unbeaten team won the West Wales Division One league.

He then took up triathlons, and eventually became part of Gordon Ramsay’s charity Ironman team.

Andrew works mainly in Morriston’s burns and plastics theatres and is a clinical tutor in Swansea University’s Medical School.

He has also carried out volunteering work in Uganda, leading to the charity involved – the Mityana Community Foundation – inviting him to become its chief medical advisor. 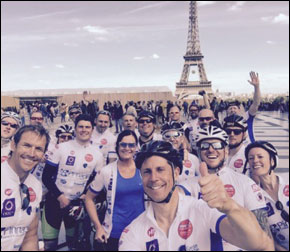 Andrew said he was determined to carry on with the Gordon Ramsay Ironman training ready for his first competitive event with the GR100 team later this month. He added:

“I did wonder if the surgery would affect my training but then I decided I wasn’t going to let that happen.

“It’s all going well. We’ve been back training for a week. I went up and had a swim with them last week.

“I told the trainer what had happened with me and he told Gordon.

“Gordon and his wife said they had a lot of respect that I was going ahead with this and they would support me any way they could.

“He had his arm around me when he told me this. He has his television image but in real life he’s an absolute gentleman.”

If you would like to donate, go to Andrew’s Just Giving page: www.justgiving.com/andrew-jones65.