Owen Sheers, writer, poet, and professor of creativity at Swansea University, is to launch his new novel – I Saw a Man – at Hay, the world’s largest literary festival.

Moving from London and New York to the deserts of Nevada, Sheers’ new novel is a brilliant exploration of violence, guilt and attempted redemption, written with the pace and grip of a thriller. He takes the reader from close observation of the domestic sphere to some of the most important questions and dilemmas of the contemporary world.

"The event that changed all of their lives happened on a Saturday afternoon in June, just minutes after Michael Turner – thinking the Nelsons’ house was empty – stepped through their back door."

There are two events: 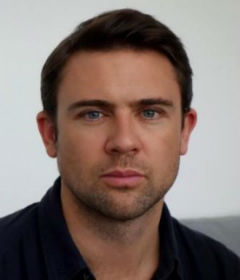 Owen Sheers (pictured) is a poet and playwright whose latest works include the National Theatre of Wales’ Mametz, the award-winning poem Pink Mist and Calon.

He joined Swansea University as Professor in Creativity from 1 May 2015. Based in the University’s Research Institute for Arts and Humanities (RIAH), Owen will play a key role in nurturing creativity among staff, students and the community, as well as continuing to develop his international profile as one of Wales’ finest writers.

“The post of Professor in Creativity is an exciting appointment, offering the opportunity to delve into the treasure chest of ideas and stories that is a University with a view to creating artistic projects fuelled by the research and energy of Swansea’s academics and students.

I’m particularly interested in the possibilities the post offers for engagement and collaboration with the local community, and in doing so, helping to weave a strong cultural thread through the daily life of the University.

It’s also my hope that these projects will offer Swansea’s students, in the sciences as well as the arts, an active artistic environment in which they might further develop their skills beyond the lecture hall or the library.”