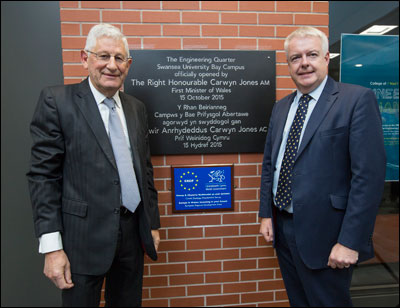 The Engineering Quarter has benefitted from a significant buildings and equipment funding award of €49.4m from the European Regional Development Fund (ERDF) through Welsh Government.  In addition, the University has attracted £60m of European Investment Bank (EIB) funds – the first EIB investment in Wales.

On arrival at the Bay Campus, the First Minister was welcomed by the University’s Vice-Chancellor Professor Richard B Davies, and Head of the College of Engineering Professor Javier Bonet, before beginning his visit at Engineering East,which has a strong focus on the manufacturing industry.

Engineering East is home to the Engineering Manufacturing Centre, which along with the Swansea Bay Innovation Hub has been part-funded by the ERDF through Welsh Government.  The building also incorporates the main workshop facilities for the whole of the College of Engineering and supports the Civil Engineering, Electrical and Electronic Engineering, and Sport and Exercise Science disciplines.

The First Minister met researchers and students as he toured some of the University’s world-class engineering facilities and equipment at the Engineering Manufacturing Centre and Swansea Bay Innovation Hub, including the Welsh Centre for Printing and Coating (WCPC). 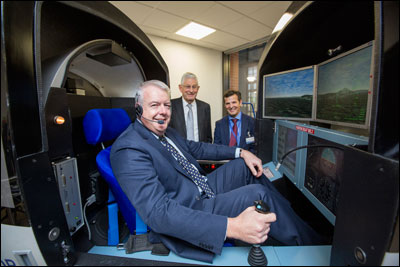 The First Minister was then invited to unveil a Welsh slate plaque in front of staff, students, and invited guests, to officially open the facilities.

A Flickr set of images from the visit/opening can be found here.

“This truly fantastic facility which has benefitted from extensive EU support, including £15m funding approved from Welsh Government, will provide a world-class learning environment that will attract and develop the best students from across the globe.

“It will drive research and innovation and will increase Wales’ global competitiveness in the field of engineering and manufacturing. I look forward to hearing about the continued success of this Quarter and the Campus overall for many years to come.”

“Strong collaborative research links with industry have been a distinctive feature of the College of Engineering since the University’s establishment in 1920, and are among the best in the UK today.  The Engineering Quarter is designed and equipped to support further growth in collaborative activities with both existing and new partners worldwide, driving innovation, economic growth, and entrepreneurship in the region.

“The high-quality facilities in the Engineering Quarter will rival those of any university in Europe.  They will enable us to increase the size of our College of Engineering by attracting the very best staff and students.

“We were pleased to welcome key figures from Welsh Government, professional institutions, and industry at the Bay Campus today, to join us in launching an exciting new era for the University.”

Professor Javier Bonet, Head of the College of Engineering, said: "The Engineering Quarter's extensive, first-class facilities have been designed to capitalise on our research expertise and our current collaboration with major international companies, including Rolls-Royce and Tata Steel, and to enable room for growth to further meet the needs of industry.

"Engineering at Swansea is consistently ranked among the best in the UK, featuring among the Top 10.  We continually strive for excellence in our teaching and research, and the Engineering Quarter will enable us to build on our current success, co-locating industry with our academic staff and students to enable applied research, accelerated innovation, and employment opportunities.

"We are extremely proud of our success and achievement since the University was established in 1920 – and I am confident the College of Engineering at Swansea will make an even greater impact in the future."