Parch, the first TV drama written by Dr Fflur Dafydd, Senior Lecturer in Creative Writing at Swansea University, starts on S4C on Sunday, 31 May, a bittersweet series which will lead viewers on an emotional journey.

Dr Dafydd has long established herself as an acclaimed writer, and has won many awards including the Prose Medal, and the Daniel Owen Memorial Prize at The National Eisteddfod; as well the Hay Festival Award in 2013 for the best English-language novel, Twenty Thousand Saints. Last year, it was announced that Dr Dafydd’s novel Y Llyfrgell (The Library) will be adapted into film as part of Film Agency for Wales’ Cinematic scheme.

‌The Reverend Myfanwy Elfed is the main character in Parch. But although she is a vicar, the drama is not about religion according to Dr Dafydd, who's originally from Llandysul but now lives in Carmarthen. 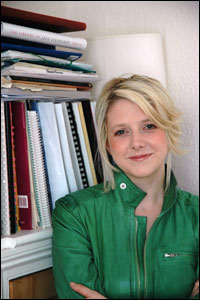 "First and foremost Myfanwy is a woman and a mother - and secondly, she's a vicar.  Myfanwy is typical of many women who try her best to bring up a family while juggling lots of other things.”

When Myfanwy hears she has a life-threating condition affecting her brain, her attitude towards life changes. She looks at the world differently and her relationship with her family is shaken to the core.

Although the subject matter may appear intense, Dr Dafydd (pictured left) insists that Parch isn't a grim, gritty drama. Myfanwy's brain condition causes her to see colourful and vibrant visions, and this leads us to more light-hearted scenes.

"It's hard to put a genre on my work, but I like to combine the real and surreal, all the characters in Parch have an element of the absurd."

Myfanwy feels the world is against her; her relationships with her husband and children are fragile, and she doesn't feel able to share her news with them.  Myfanwy questions the meaning of life, and grows closer to the village undertaker, Eurig.

Dr Dafydd is married to an undertaker herself, Iwan, and has also been working closely with Manon Ceridwen James, a vicar in the Llanddulas and Llysfaen parishes in Conwy.

"Having my husband and Manon's feedback has been crucial in creating the drama. The vicar and undertaker are key figures within society; especially as they support people coming to terms with grief, and it's important they are portrayed accurately on-screen."

Parch is broadcast on Sundays at 9.00pm on S4C, with optional English and Welsh subtitles. It is also repeated at 10.00pm on Tuesdays with on-screen English subtitles.