Collaboration: How Swansea has joined the premier league of UK universities

Swansea University Vice-Chancellor Professor Richard B Davies outlines how there are greater things to come for the institution as its £450m Bay Campus development opens in September 2015.

This autumn, Swansea University will open its £450m Science and Innovation Bay Campus, which is being developed by St. Modwen, the UK’s leading regeneration specialist, and which has been widely recognised as one of Europe’s leading knowledge economy projects.

Gifted a 40-hectare site by one of the University’s major industrial partners, BP, the ambition and industry-focussed nature of this development has attracted £60m of European Investment Bank funds – the first EIB investment in Wales.

The University’s vision has also been substantially supported with more than £90m in Welsh Government, UK Government, and European structural funding, through the European Regional Development Fund (ERDF) managed by the Welsh European Funding Office (WEFO), with more than £20m to create an Engineering Manufacturing Centre (EMC). 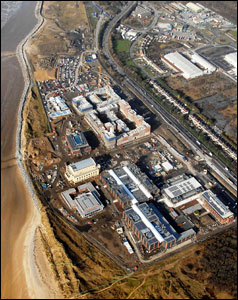 The Bay Campus will continue the Swansea University tradition of co-location of research and industry to drive innovation, economic growth and entrepreneurship in the region. The integrated academic and industry working at Swansea provides for strength of applied knowledge and tremendous ‘real-world’ experience for our students.

The University’s collaborative research links with industry are among the best in the UK. On the Bay Campus, The Engineering Quarter alone will house two new research institutes, allowing for major research collaborations with Rolls-Royce, Tata Steel, and BP in materials testing and energy safety.

Telecommunications billionaire Sir Terry Matthews – an alumnus of the University – is confident that Swansea University and its new Science and Innovation Bay Campus can play a powerful part in driving economic growth and regeneration in the region and beyond.

Sir Terry has said that he would be delighted if Swansea University was known for the best software graduates and the best computer science people, and that the region became known world-wide as “world class” in software, as well as driving graduate entrepreneurship levels. It is a challenge that Swansea is rising to.

Swansea’s success in the Research Excellence Framework (REF) in December 2014 showed the largest climb up the rankings of any research-intensive University in the UK, up to 26th place from 52nd in 2008, delivering world leading and internationally excellent research across all disciplines – Science, Engineering, Medicine, Arts, Humanities and Social Sciences.

REF 2014 measures of impact – that is the difference that research made to the wider world – demonstrated more than 10,000 jobs created and safeguarded; an economic impact of £2.1 billion; and 341 million people engaged by Swansea University’s research.

The University’s outstanding REF performance is central to the stimulating and enriching teaching and student experience provided at Swansea. It is integral to our achievement of the highest 5* QS ranking for teaching excellence, and an NSS student satisfaction score ahead of the UK average.

With Swansea’ existing Singleton Park and new Bay Campus locations offering inspiring and spectacular seaside locations, it is no wonder that Swansea University is #makingwaves.‌

UK and overseas student numbers have grown considerably, resulting in a vibrant and stimulating student community, with access to some of the best societies and sporting facilities in the UK.

The University’s Employability Academy, Queen’s Award winning Discovery Volunteering centre, and entrepreneurship initiatives – championed by industry leaders – ensures that we develop young people into graduates with the academic and all-round life skills that are demanded by employers.

This tremendous rate of growth has occurred in an increasingly competitive HE environment. Swansea’s income growth over the past 10 years has out-performed not only the HE sector in all areas, but also the Russell Group, in research income, UK and overseas student numbers (2003/04 to 2012/13).

To use a sporting analogy – and with a nod to another of our collaborators, Swansea City FC – Swansea has joined the premier league of UK universities.

The findings of REF 2014 show that Swansea University has succeeded in its ambition of becoming a top-30 UK research University. The University’s strong upward trajectory will be further enhanced a doubling in research and teaching capacity with the opening of the new Science and Innovation Bay Campus.