With just 13 weeks to go until it opens, Swansea University’s Science and Innovation Bay Campus is really taking shape – and the careful and sustainable landscaping of the campus is also adding the finished feel to this transformational development for the University. 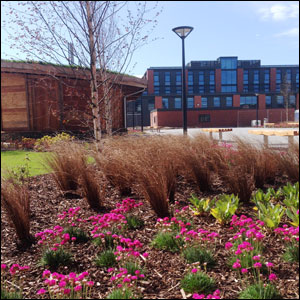 The UK’s leading regeneration specialist, St. Modwen, is the land owner and lead developer for the Bay Campus project. Through St. Modwen, the local architect, Stride Treglown Ltd, has ensured the Bay Campus’ landscaping complements the £450million development’s impressive array of buildings as part of the agreed site master plan.

The widening of Fabian Way to form a safe main entrance to the Bay Campus required the removal of the existing vegetation, but there has been extensive new tree and native woodland planting along the Fabian Way boundary.

The Bay Campus is also enhanced by the design and public squares, open spaces and landscaped courts, utilising as many local and a variety of species as possible to ensure foliage throughout the year.

In addition, a total of 3,800 shrubs, ranging from 60cm to 80cm high and including hazel, hawthorn, holly, alder buckthorn, blackthorn and field rose, have been planted.

In areas, the Fabian Way verges form part of conservation habitats managed by the Highways and Neath Port Talbot Local Authority.  During July and August 2014, grass seed was collected from the Fabian Way conservation verges and stored ready for sowing.‌

As the Bay Campus site works progressed and the soft landscape areas were developed with imported subsoil and topsoil, the soil profile was cultivated and the collected grass seed was sown to re-establish the Fabian Way grass verge with species of local origin.

The provision of various tree and shrub heights within the new woodland planting on Fabian Way will enable a vegetation structure to establish and form a visual ‘buffer’.

This, combined with the soil mounding, enhances the ability to screen and soften the impact of the campus buildings and in time it will retain the ‘green’ edge associated with the conservation verge of Fabian Way. 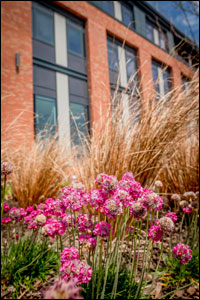 The Bay Campus is located adjacent to the Crymlyn Burrows Site of Special Scientific Interest (SSSI), an area that provides examples of habitat transitions between sand dune and saltmarsh, and a planted boundary to the east of the Bay Campus will protect the SSSI and provide limited access to campus users.

Professor Iwan Davies, Pro-Vice-Chancellor, who is leading on the development and delivery of the Bay Campus for the University, said: “The selection of species planted at the Bay Campus have been considered to respond to the challenging environment of this coastal location, to withstand strong winds, high levels of rainfall, periods of drought and salt spray.

“Consultation was undertaken with the ecologist from Neath Port Talbot Local Authority to ensure that the appropriate plant species were of local origin and would not cross-pollinate with the adjoining SSSI site.

“Consideration has also been given to seasonal change, where deciduous trees lose their leaves during winter periods and screening is not as effective.  Evergreen species that retain leaves throughout the year have been included, such as pines and holly, to still offer canopy cover during the winter.”

The newly planted area to Fabian Way and those throughout the Bay Campus development will be subject to an ongoing management and maintenance programme to ensure the successful establishment of all the soft landscape areas.

This will ensure that the external areas of the Bay Campus provide a positive and lasting attribute to the community and the locality. 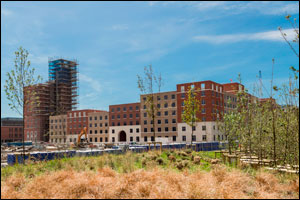 The University has made significant improvements in recent years thanks to the hard work of its Sustainability Team.

The University became the first university in Wales to achieve the international standard ISO 14001, as well as an EcoCampus platinum award for its environmental management systems, after external auditing by the national Environmental Management System (EMS) and award scheme for the higher and further education sectors.

In January this year, the University was awarded a First Class Award and ranked 21st out of 151 universities in the People and Planet University League 2015 – the UK's only comprehensive and independent green ranking of universities in The Guardian newspaper.