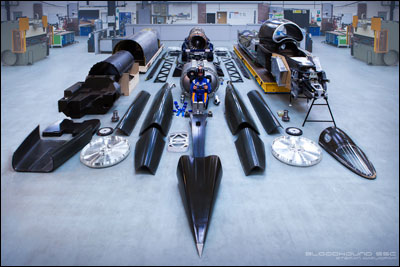 Swansea University’s primary role in the 1,000mph (1,609km/h) Land Speed Racing car initiative has been the contribution of its expertise in Computational Fluid Dynamics (CFD) research, with Swansea College of Engineering researchers working as part of the design team on the aerodynamic design of the supersonic car.

Dr Ben Evans (pictured below), Lecturer in Aerospace Engineering and member of the BLOODHOUND SSC design team, said: “The BLOODHOUND SSC Expo marks an important milestone for the project, which takes a leap towards realising its objective of achieving a 1,000mph Land Speed Record after seven years of design and over a year of build.

“The project is entering its final and most exciting stage and Swansea University’s College of Engineering has been instrumental in the project’s success to date, having been a key technology provider since day one in the early concept stages back in 2007.

“Engineers at Swansea have been working closely with BLOODHOUND engineers, Rolls-Royce, and Rolex in developing the vehicle’s design and we will soon find out how accurately our CFD modelling capabilities have been at predicting the car’s aerodynamic performance.

“We look forward to showcasing the car at the Expo before systems testing and the scheduled 200mph trial this November at the Newquay Aerohub in Cornwall, and then the high speed testing and World Land Speed Record attempts at Hakskeen Pan in South Africa’s Northern Cape in 2016.”‌

The 135,000 thrust hp land speed racer will be presented in record attempt configuration but without the carbon fibre bodywork on one side, in order to show the car's inner workings.

Visitors will see that 98% of the car is complete, including the Rolls-Royce EJ200 jet engine in place as it will be when BLOODHOUND SSC targets 800mph in 2016, as well as the supercharged Jaguar V8 engine used to pump oxidiser into the rocket.

The intricate carbon fibre, steel and alloy chassis will be exposed along with the complex internal skeleton of BLOODHOUND's huge tail-fin. The public will also be able to view the completed cockpit – driver Andy Green's supersonic office – and see the first pictures from the car's on-board cameras.

Visitors will be able to enjoy the Castrol EDGE and Jaguar BLOODHOUND Driving Simulator and Castrol EDGE Virtual Reality Experience. Team support vehicles, including the custom-built Jaguar Rapid Response Vehicles, will also be on show, completing a stunning exhibition of cutting-edge engineering.

Members of the BLOODHOUND Team will also be on hand throughout the Expo to meet the public and provide the inside track on this engineering adventure.

Project Director Richard Noble said: "Public interest in BLOODHOUND is incredible and we simply can't get enough people into our Bristol Technical Centre to satisfy demand.

“We realised too that we have a unique opportunity to show the car before its carbon fibre and titanium skins are fitted in place, so people can see the extraordinary engineering inside.

“Thanks to the generous support of our partners we are able to bring BLOODHOUND to London and put it on public display.

“This is a chance too for us to share our plans for record-breaking in 2016 and announce some exciting new partnerships. We have a host of international organisations discussing sponsorship proposals with us and hope to advance those deals during our BLOODHOUND Expo.

“With the car nearly complete our fundraising effort is now all about getting to South Africa and setting a new record in 2016."

The BLOODHOUND Expo is free and priority admittance will be by means of a timed ticket.  To apply please visit www.bloodhoundssc.com/expoticket.