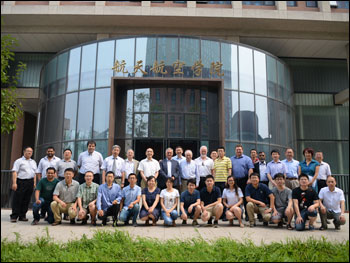 They were welcomed and hosted by Professor Si Yuan, Pro-Vice-Chancellor of Tsinghua University, Professor Xingang Liang, Deputy Head of Tsinghua’s School of Aerospace, and Professor Zhuo Zhuang, President of the Chinese Association of Computational Mechanics.

Professor Si Yuan, Pro-Vice-Chancellor of Tsinghua University, gave the welcome address at the official opening of the workshop and said: “It is a great pleasure to welcome our distinguished guests from Swansea University to Tsinghua.

“Having pioneered the development of finite element methods, Swansea University has a long established international reputation in computational mechanics.  Professor Roger Owen and the late professor Olek Zienkiewicz were both elected as the foreign member of Chinese Academy of Science, the highest academic recognition in China.

“Numerous researchers and engineers in China, including my own PhD research work dated back to 30 years ago, have learnt and benefited from the classic textbooks authored by Professor Zienkiewicz and Professor Owen.  I am very delighted to see the fruitful and sustained research collaborations between the two institutes."

With more than 15,000 undergraduates, 12,000 Master students and 10,000 PhD candidates, Tsinghua University is widely regarded as China’s premier university and it consistently ranks internationally as among the top 50 in the world.  The University was established in 1911, and its campus is situated on the former imperial gardens of the Qing Dynasty and surrounded by a number of historical sites in north-west Beijing.

Professor Zhuo Zhuang, President of the Chinese Association of Computational Mechanics, who led the 2013 Tsinghua delegation to Swansea, added: “We are very pleased to host the third Tsinghua-Swansea workshop in Tsinghua.

“We look forward to continued, successful research collaborations between our two institutions."

Professor Steve Brown, Deputy Head of Swansea University's College of Engineering, said in the official closing of the workshop: "The friendship and the strong research partnership between Swansea and Tsinghua have been strengthened again in the last few days during the third workshop and we have enjoyed every aspect of the visit to Tsinghua University.

“A number of new ideas and new research collaborations have already been initiated during the presentation and discussion. Such high efficiency and productivity would not have been possible without the trust and friendship.

“We look forward to hosting the fourth workshop in Swansea. But please do not wait for two years. We always welcome Tsinghua scholars and students to visit Swansea and do joint research."

Swansea University’s College of Engineering has built a strong and sustained research partnership with Tsinghua University, for the general research field of computational engineering.

This strategic research collaboration has led to over 20 joint publications in leading international journals. Nominated by Prof Chuhan Zhang at Tsinghua University, ZCCE colleague Prof D Roger J Owen (FRS, FREng) was elected in 2011 as the foreign member of Chinese Academy of Science, which is the highest academic recognition in China.

“This strategic partnership brings together the complementary strengths of each institution, which not only allows high-quality research to be conducted more efficiently, but also opens up new opportunities for international collaboration.”