Artist Dan Llywelyn Hall and academics from Swansea University’s College of Arts and Humanities will lead a team of 40 participants in an ‘Art @ the Hafod – the spirit of place’ event on Monday, November 16, in a bid to revive a neglected golden age of an industrial landscape of South Wales.

Part of 'Being Human', the UK's only festival of the humanities, the free ‘Art @ the Hafod – the spirit of place’ session takes place from 11:00am until 16:00pm at the Hafod Morfa Copperworks and is open to people of all ages.  It is one of several free events across the city being run by Swansea University’s Research Institute for Arts and Humanities (RIAH), chosen as one of five hubs for the UK Festival.

The session, in partnership with Swansea Museum, will focus on the spirit of place and connection with the environment through drawing. Participants can expect to develop their observational skills and confidence with drawing and painting, while also engaging with the material culture relating to industrial heritage, which is part of Swansea Museum’s collection.

The Hafod-Morfa Copperworks and the White Rock works in Swansea were once at the centre of the global copper trade.  They helped to ensure that in the mid nineteenth century Swansea was producing two-thirds of the world's smelted copper.

At that point up to 200 chimneys could be seen clustered together in the valley where a whole community was formed with schools, churches, chapels, and transport infrastructure, and Swansea became known as ‘Copperopolis’. 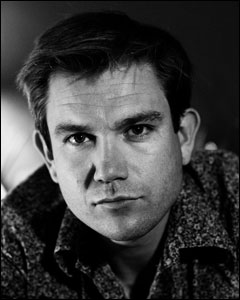 However, with the demise of industrial activity the works closed their doors and the sites became a relic of the international copper trade.

‌Now through Cu @ Swansea, a regeneration project led by Swansea University in partnership with the City and County of Swansea and the local community, including those with memories of working in the copper industry, the partnership are re-engaging with the sites’ past and looking forward to a brighter future.

‌London-based artist Dan Llywelyn Hall (pictured), whose work has often examined the role of the modern landscape in society, said: "By working directly from intense observation we'll be drawing the various locations that have clearly bared witness to one the most important industrial heartlands of Britain.  Each participant will be given a location and through the act of drawing, help to form the stories by building up the visual clues.

“It's simply staggering that in such recent past we've already forgotten how these places operated and what went where, now only relying on archaeology.  We possibly know more about Roman Wales than we do about this remarkable part of our heritage.

“Drawing is one of the best ways to understand your environment, in an age where we are desperately trigger-happy with our phones, do we ever really look and re-examine the images?  I certainly don't.

“It's by immersing oneself and drawing you can achieve a sense of place as both your intellectual and emotional reactions build an image.  I'm certain that we'll collectively form a fascinating story from these images and engage an otherwise indifferent generation with their past."

Huw Bowen, Professor of Public History at Swansea University and Director of the Cu @ Swansea project said: “Over many years the industrial landscapes of South Wales have inspired artists in different ways. 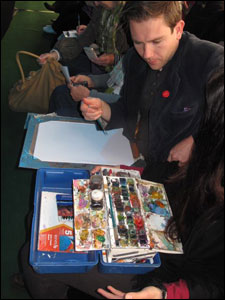 “This exciting project will help to do this in the Lower Swansea Valley, and we hope that the community will engage creatively with the complex and challenging landscape to produce a body of work that reflects the powerful and enduring impact that the copper industry had on the area.

“It will add an entirely new dimension to the programme of work we are doing on Swansea’s copper heritage, and will help to ensure that a process of cultural regeneration tales place alongside the economic and social of regeneration of Copperopolis."