Swansea University physicist Professor Niels Madsen (pictured below) has been elected a Fellow of the American Physical Society (APS) – the world's largest organisation of physicists – in recognition of his outstanding contributions to antihydrogen physics. 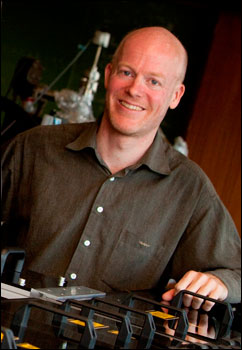 The citation, which will appear on Professor Madsen’s Fellowship Certificate, will read as follows: “For seminal contribution to the field of antihydrogen and leadership in developing techniques that enabled the trapping and first microwave spectroscopy of antihydrogen.”

Professor Madsen, who is based within the University’s College of Science, said: “I was delighted and honoured to learn I had been recommended for the Society Fellowship by the Division of Plasma Physics, at the September meeting of the APS Council of Representatives.

“Election to Fellowship in the APS is limited to no more than one half of one percent of the membership and is a recognition by your peers of your contributions to physics, and so I am extremely proud to accept this international honour.”

Professor Madsen, who joined Swansea University in 2005, is an experimental physicist specialising in work on fundamental physics with antimatter.

He is co-founder and group leader in the ALPHA collaboration at CERN, the European Organisation for Nuclear Research. ALPHA was the first group to trap antihydrogen and observe the first quantum transitions in it.

He has been actively involved in antihydrogen research since 2001, playing a substantial role in the ATHENA team at CERN that first formed low energy antihydrogen in 2002.  His research group at CERN led the effort to implement several key techniques leading to the first antihydrogen trapping and designed and built significant parts of the ALPHA apparatus.

For this work Professor Madsen was awarded a Royal Society Senior Leverhulme Fellowship in 2010, and the 2011 James Dawson award for Excellence in Plasma Physics Research.

The ALPHA project is trapping antihydrogen atoms and plans to conduct precision comparisons with hydrogen. According to fundamental theories the universe should consist of equal amounts of antimatter and matter. However, it appears to consist only of matter. One explanation for the discrepancy could be that there is a small (and unexpected) difference between matter and antimatter.

Swansea is a world leader in positron and antihydrogen physics. Professor Madsen is leading a project to use lasers to reduce the antihydrogen temperature to facilitate a vast improvement in the number of trapped antihydrogen – a key step towards precision comparisons.

For more information on the Department of Physics at Swansea University visit http://www.swansea.ac.uk/physics/.