The European Travellers to Wales exhibition at Swansea Museum has welcomed award-winning German writer Jörg Bernig for a reading of his fiction, some of which is set in Wales, and discussion.

Jörg outlined how he has transformed his experiences travelling and living in Wales over some 25 years into poems, novels and short stories.

His 2007 novel Neither High nor Low Tide (Weder Ebbe noch Flut) is partly set in Swansea, where he worked in the University languages department in the early 1990s and which he counts as the place which inspired him to begin writing.

Jörg Bernig grew up in the former German Democratic Republic where he worked as a miner, farmhand, and conscripted soldier. After the collapse of the communist East German state, he taught in Wales and Scotland, studied for a number of university degrees in Germany, and published poetry, fiction, and history.

Jörg Bernig was writer in residence at Swansea University in 2013.

Picture: ‌Jörg Bernig (right) at the reading at Swansea Museum, with Dr Tom Cheesman of the department of languages, who has translated Jörg's work

German writer describes Swansea as "the real centre of the universe"

This event was organised in collaboration with Think German Wales and co-sponsored by the German Embassy and the AHRC.

How does Wales look to visitors from elsewhere in Europe?  This exhibition, drawing on research involving a Swansea languages expert, looks at how European visitors – including explorers, tourists and refugees – have seen our country from 1750 to 2010.

The exhibition is at Swansea Museum and is called EuroVisions: Wales through the Eyes of European Visitors, 1750-2015. It runs until 25 January 2016.

‌On display at the exhibition are works by artists from Switzerland, Belgium, France, Italy, Germany, Austria and Poland from the Romantic period up to the present.

‌The pictures show Wales in all its many facets, ranging from idyllic landscapes to industrial centres and portraits of the people living in Wales.

Dr Kathryn Jones of the Department of Languages, Translation and Communication at Swansea University, described the research which lies behind the exhibition: 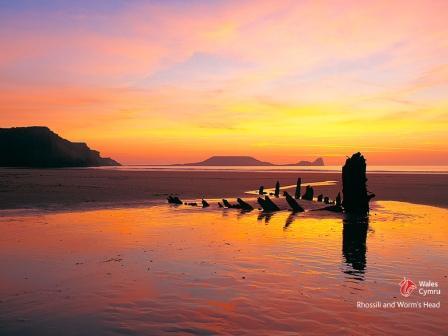 “The project was very broad in scope. We investigated a wide range of texts from travelogues and diaries to guidebooks and blogs.

We discovered a wealth of rich and varied material which will really help us understand European perceptions of Wales.

We wanted to share this with the public, so we are very pleased that some of the work is now going to be on display in the Swansea Museum exhibition.”