Our oceans and the life in them face a more uncertain future because ocean acidification, caused by climate change, is altering the growth of phytoplankton, the organisms which are the basis of the entire food chain in the sea, a Swansea-led research team has shown.

The team included researchers from Swansea University’s Centre for Sustainable Aquatic Research (CSAR), with colleagues from Plymouth, Denmark and the USA.  Their research has been published today in the Proceedings of the Royal Society B. 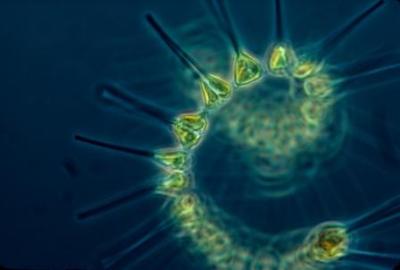 Picture:  Phytoplankton, the base of the marine food chain; Credit: US National Oceanic and Atmospheric Administration

The research team also looked at the coupled effects of acidification together with a process called eutrophication, which is when the sea becomes enriched with nutrients such as fertiliser and which can encourage the spread of harmful algae.

They studied how three types of phytoplankton responded to different levels of acidity in seawater: existing levels (pH 8.2); a more acidic level likely in future with ocean acidification (pH7.6); and a more alkaline level (pH 8.8).

•    It is likely that we will see: “increased frequency of deleterious events such as harmful and ecosystem disruptive algal blooms, and increases in hypoxic and anoxic zones [deprived of oxygen], affecting fisheries and thence food security”. 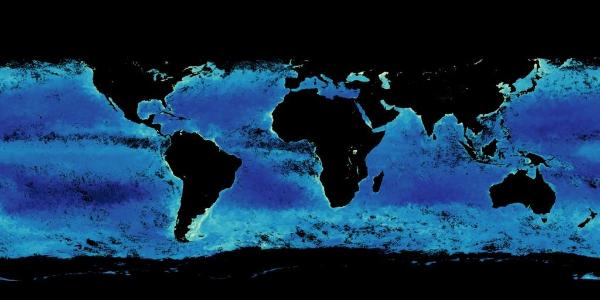 Picture: Phytoplankton across the world: map made from NASA Modis satellite observations, showing where and how much phytoplankton were growing on a given day, or over a span of days. The black areas show where the satellite could not measure phytoplankton.  Credit: NASA

Dr Aditee Mitra of the Centre for Sustainable Aquatic Research (CSAR) at Swansea University, and one of the authors of the paper, said:

Ocean acidification is unquestionably due to carbon dioxide released by human activity.  Microalgae (phytoplankton) and indeed all life in the oceans are facing more acidic conditions. This is affecting the competition between different species and thus changing patterns of growth.

Professor Kevin Flynn, head of CSAR, and lead author of the paper, said

The implications of our results for shifting plankton successions in shelf seas are numerous and far-reaching.  They indicate patterns of change that will affect fisheries and the health of coastal waters.

Life in the oceans is driven by the growth of plant-like microalgae like phytoplankton.  Our work shows that changes to phytoplankton will impact on the very base of the food chain, affecting marine life through to fish and whales, and thence also us. 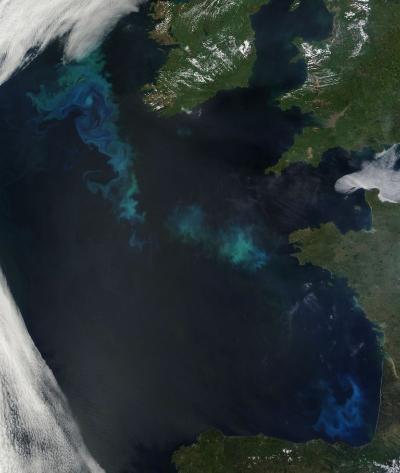 •    Plankton comes from the Greek “planktos” meaning to wander or drift, referring to the fact that they are largely borne by ocean currents.

•    Plankton can be subdivided into animals, or zooplankton; plant-like phytoplankton; and the mixotrophs that combine (triffid-like) both plant and animal-like feeding.

Find out more about the Centre for Sustainable Aquatic Research

Watch BBC TV coverage of the Centre's work on zooplankton

Picture: The vibrant colours in this image are from tiny organisms, phytoplankton, that grow explosively in the North Atlantic—from Iceland to the shores of France—in the spring and summer.  Credit: NASA