The BLOODHOUND Supersonic Car (SSC) made its world debut in London’s Canary Wharf today (Thursday, September 24), before going on public display tomorrow and Saturday to an expected 8,000 visitors. 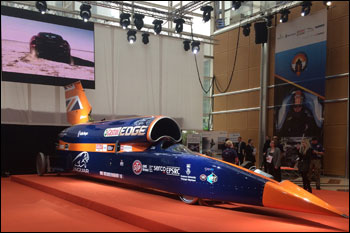 The BLOODHOUND SSC is designed not only to go faster than the speed of sound (supersonic), but to over 1,000mph (1,600km/h).

As well as being one of the founding sponsors of BLOODHOUND SSC, Swansea University has been instrumental in the project’s success to date, having been a key technology provider since day one in the early concept stages back in 2007. 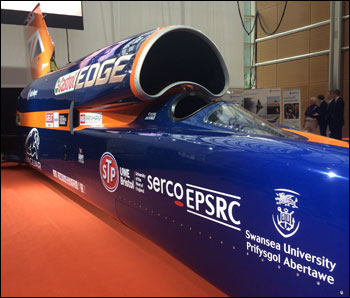 The University’s primary role in the 1,000mph (1,609km/h) Land Speed Racing car initiative has been the contribution of its expertise in Computational Fluid Dynamics (CFD) research, with College of Engineering researchers working as part of the design team on the aerodynamic design of the supersonic car.

The 135,000 thrust hp land speed racer was presented in record attempt configuration at today’s event at East Wintergarden, but without the carbon fibre bodywork on one side, in order to show the car's inner workings.  Ninety-eight per cent of the car is now complete, including the Rolls-Royce EJ200 jet engine in place as it will be when BLOODHOUND SSC targets 800mph in 2016, as well as the supercharged Jaguar V8 engine used to pump oxidiser into the rocket. 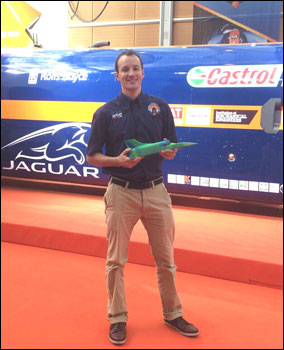 Speaking at the event, Dr Ben Evans (pictured), senior lecturer in aerospace engineering and member of the BLOODHOUND SSC design team, said: “This BLOODHOUND SSC unveiling marks an important milestone for the project, as it takes a leap towards realising its objective of achieving a 1,000mph Land Speed Record after seven years of design and over a year of build. The BLOODHOUND SSC has suddenly become very real.

“We at Swansea's College of Engineering have been working closely with BLOODHOUND engineers, Rolls-Royce, and Rolex in developing the vehicle’s design, and next year will be the most exciting stage of the project, and for us at Swansea, as we will find out how accurately our CFD modelling capabilities have been at predicting the car’s aerodynamic performance.

“I am incredibly proud of the University's involvement in developing the BLOODHOUND project, and I'm already looking forward to next year, when BLOODHOUND will undoubtedly become the world's most famous car."

Project Director Richard Noble said: "Public interest in the BLOODHOUND project is incredible. With the car now built and the track in South Africa prepared our focus is on racing in 2016. That part of the adventure starts with runway tests at Newquay Aerohub next Easter.

"We have worked closely with Swansea University, and the contribution that Dr Ben Evans has made to the aerodynamics of the car has been immeasurable.

“In 2010, there were serious aerodynamic issues with the rear of the car. Ben proposed a novel design optimisation method, which required partnering with Intel, and as a result we were able to solve those issues and continue with the project."